It’s just an observation, but it certainly appears that foreclosure judges have been given orders to squash homeowners like a bug at the lower court level and if they can afford to appeal – maybe, just maybe, they might get some fair and balanced justice. The process so far has been highly unbalanced. Whether foreclosure judges are just not competent enough to understand the securitization, rehypothecation and securities scheme, or whether they’ve been told by higher-ups that if they don’t rule against homeowners all their pensions will be lost or the economy will crash – it’s just a bizarre and pathetic state of mind. END_OF_DOCUMENT_TOKEN_TO_BE_REPLACED

Big banks hold great sway in Washington these days, far more than troubled homeowners do. But outside the Beltway, many people remain caught in the maw of the financial giants, which is why it is heartening when some judges step into the fray.

Consider two opinions involving Wells Fargo, a bank that enjoys a somewhat better reputation than many of its peers. On Monday, a judge in a state court in Missouri ordered Wells to pay over $3 million in punitive damages and other costs for abusing a borrower. Then, on Thursday, a judge in Federal Bankruptcy Court in suburban New York ruled on behalf of another borrower, concluding that there was substantial evidence Wells Fargo forged documents when it foreclosed on a property. END_OF_DOCUMENT_TOKEN_TO_BE_REPLACED

We’ve discussed UETA and eSign and the significance of explicit consent…in most cases pre-2008…there isn’t any. Here is a Indiana case that is riveting: Good v. Wells Fargo. Read it HERE.

In this case, Bryan Good stated that in this 2008 transaction there were apparently 2 notes. Wells Fargo asserts that Good signed an eNote with a new (policy change) paragraph 11 – and that is still not enough.

Yes – go get your promissory notes and look for paragraph 11. You probably won’t see it if your note pre-dates 2008. END_OF_DOCUMENT_TOKEN_TO_BE_REPLACED

“[L]and records across the country have been polluted, diluted, laundered and rendered useless by MERS (the Mortgage Electronic Registration System), and Landtegrity.com has posted a petition demanding answers from the White House,” wrote Richard Zombeck, in the Huffington Post April 2103.

No answers have been received. Now is time to prepare for the 2014 elections and get the point across. We need to unite and visibly display our discontent for the damage done to our property records. Let’s put a bumper sticker on every car!
Order your bumper sticker now so that every politician can clearly see the #1 agenda on the minds of every homeowner in America is to clean up the land records. END_OF_DOCUMENT_TOKEN_TO_BE_REPLACED

While the foreclosure crisis might sound to some like duck soup, Professor John E. Campbell from the University of Denver Sturm College of Law has taken the time to dissect the issues in his Mortgage Crisis in a Nutshell video explaining precisely what has happened to homeowners and searching for the reasons why.

Prof. Campbell explains what has happened in the traditional sense and how Mortgage Electronic Registration Systems, Inc. participated in part of the scheme. He also discusses how and why the homeowners were not intentionally at fault.

In this one-hour video, Attorney John E. Campbell explains the main aspects of the mortgage crisis that has devastated the U.S. housing market and the economy. Watch the video and then let’s discuss securitization in a little more detail below. END_OF_DOCUMENT_TOKEN_TO_BE_REPLACED

Never let it be said that where there is big money invested, there won’t be crooks in the kitchen.  It doesn’t matter how big you are there’s always a short cut that can that can potentially create more wealth – if you don’t get caught.

An investigator in the northwest uncovered just such a scam – so big that authorities claim it needs multi-state attention. It appears Green Tree Servicing has been flying under the radar and was hardly noticed until a recordation research team began uncovering similarly signed documents – yup, the old robo-signed Assignment of Mortgage trickery again… but this time new and improved via computer, maybe for speed and precision, ya think?

Part II:  Full-Blown Civil War Erupts On Wall Street: As Reality Finally Hits The Financial Elite, They Start Turning On Each Other

Continuing from Part I on DEADLY CLEAR:

You can read the suits filed against each individual bank here. For some more information read Bloomberg: BofA, JPMorgan Among 17 Banks Sued by U.S. for $196 Billion. Noticeably absent from the list of companies being sued is Wells Fargo.

And the suits just keep coming… 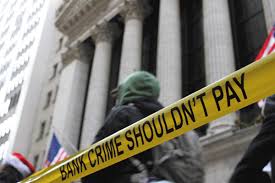 Bank of America Corp (BAC.N) was sued by the trustee of a $1.75 billion mortgage pool, which seeks to force the bank to buy back the underlying END_OF_DOCUMENT_TOKEN_TO_BE_REPLACED