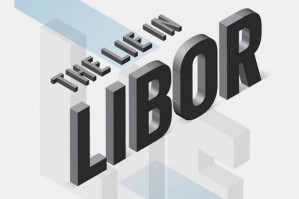 No – we’re not making this up.

According to Bloomberg By Liam Vaughan & Gavin Finch – Jan 28, 2013: “The benchmark rate for more than $300 trillion of contracts was based on honesty. New evidence in banking’s biggest scandal shows traders took it as a license to cheat.” Graphic: Bloomberg Markets

Every morning, from his desk by the bathroom at the far end of Royal Bank of Scotland Group Plc’s trading floor overlooking London’s Liverpool Street station, Paul White punched a series of numbers into his computer. 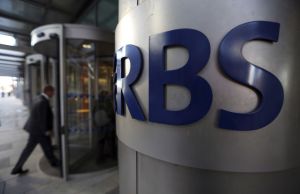 White, who had joined RBS in 1984, was one of the employees responsible for the firm’s submissions for the London interbank offered rate, or Libor, the global benchmark for more than $300 trillion of contracts from mortgages and student loans to interest-rate swaps. Behind him sat Neil Danziger, a derivatives trader who had worked at the bank since 2002.

On the morning of March 27, 2008, Tan Chi Min, Danziger’s boss in Tokyo, told him to make sure the next day’s submission in yen would increase, Bloomberg Markets magazine will report in its March issue. “We need to bump it way up high, highest among all if possible,” Tan, who was known by colleagues as Jimmy, wrote in an instant message to Danziger, according to a transcript made public by a Singapore court and reported on by Bloomberg before being sealed by a judge at RBS’s request.

Danziger typically would have swiveled in his chair, tapped White on the shoulder and relayed the request to him, people who worked on the trading floor say. Instead, as White was away that day, Danziger input the rate himself. There were no rules at RBS and other banks prohibiting derivatives traders, who stood to benefit from where Libor was set, from submitting the rate — a flaw exploited by some traders to boost their bonuses. 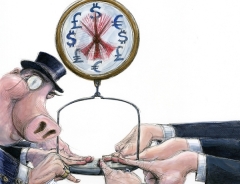 The next morning, RBS said it would have to pay 0.97 percent to borrow in yen for three months, up from 0.94 percent the previous day. The Edinburgh-based bank was the only one of 16 surveyed to raise its submission that day, inflating that day’s rate by one-fifth of a basis point, or 0.002 percent. On a $50 billion portfolio of interest-rate swaps, RBS could have gained as much as $250,000.

Events like those that took place on RBS’s trading floor, across the road from Bishopsgate police station and Dirty Dicks, a 267-year-old pub, are at the heart of what is emerging as the biggest and longest-running scandal in banking history. Even in an era of financial deception — of firms peddling bad mortgages, hedge-fund managers trading on inside information and banks laundering money for drug cartels and terrorists — the manipulation of Libor stands out for its breadth and audacity.

Details are only now revealing just how far-reaching the scam was.

“Pretty much anything you could do to increase the revenue of your organization appeared legitimate,” says Martin Taylor, chief executive officer of London-based Barclays Plc from 1994 to 1998. “Here was the market doing something blatantly dishonest. I never imagined that people in the financial markets were saints, but you expect some moral standards.”

Where Libor is set each day affects what families pay on their mortgages, the interest on savings accounts and returns on corporate bonds. Now, banks are facing a reckoning, as prosecutors make arrests, regulators impose fines and lawyers around the world file lawsuits claiming the manipulation pushed homeowners into poverty and deprived brokerage firms of profits.

For years, traders at Deutsche Bank AG, UBS AG, Barclays, RBS and other banks colluded with colleagues responsible for setting the benchmark and their counterparts at other firms to rig the price of money, according to documents obtained by Bloomberg and interviews with two dozen current and former traders, lawyers and regulators. UBS traders went as far as offering bribes to brokers to persuade others to make favorable submissions on their behalf, regulatory filings show.

Members of the close-knit group of traders knew each other from working at the same firms or going on trips organized by interdealer brokers, which line up buyers and sellers of securities, to French ski resort Chamonix and the Monaco Grand Prix. The manipulation flourished for years, even after bank supervisors were made aware of the system’s flaws.

“We will never know the amounts of money involved, but it has to be the biggest financial fraud of all time,” says Adrian Blundell-Wignall, a special adviser to the secretary-general of the Organization for Economic Cooperation and Development in Paris. “Libor is the basis for calculating practically every derivative known to man.”

More than five years after alarms first sounded, regulators and prosecutors are closing in. UBS was fined a record $1.5 billion by U.S., U.K. and Swiss regulators in December for rigging global interest rates. Tom Hayes, 33, a former yen trader at the Zurich-based bank, was charged by the U.S. Justice Department on Dec. 20 with wire fraud and price fixing for colluding with brokers, contacts at other firms and his colleagues to manipulate Libor. Hayes hadn’t entered a plea as of mid-January, and his lawyers at Fulcrum Chambers in London declined to comment.

Barclays paid a 290 million pound ($464 million) fine in June to settle with regulators, and three top executives, including CEO Robert Diamond, departed. Other banks, including RBS, were negotiating settlements in early 2013, according to people with knowledge of the talks. RBS may pay as much as £500 million to settle allegations that traders tried to rig interest rates, two people with knowledge of the matter say. UBS and Barclays admitted wrongdoing as part of their settlement agreements. Spokesmen for the two banks, and for RBS, declined to comment.

The industry faces regulatory penalties of at least $8.7 billion, according to Morgan Stanley analysts. The European Union is leading a probe that could see banks fined as much as 10 percent of their annual revenue. Meanwhile, Libor is being overhauled after the U.K. government ordered a review in September into the way the benchmark is set.

The scandal demonstrates the failure of London’s two-decade experiment with light-touch supervision, which helped make the British capital the biggest securities-trading hub in the world.

In his 10 years as chancellor of the Exchequer, from 1997 to 2007, Gordon Brown championed this approach, hailing a “golden age” for the City of London in a June 2007 speech. Brown, who later served as prime minister for three years, declined to comment.

Regulators have known since at least August 2007 that some banks were using artificially low Libor submissions to appear healthier than they were. That month, a Barclays employee in London e-mailed the Federal Reserve Bank of New York, questioning the numbers that other banks were inputting, according to transcripts published by the New York Fed. Nine months later, Tim Bond, then head of asset allocation at Barclays’s investment bank, publicly described Libor as “divorced from reality,” saying in a Bloomberg Television interview that firms were routinely misstating their borrowing costs to avoid the perception they were facing stress. 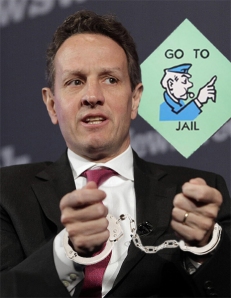 The New York Fed and the Bank of England say they didn’t act because they had no responsibility for oversight of Libor. That fell to the British Bankers’ Association, the industry lobbying group that created the rate in 1986 and largely ignored recommendations from central bankers after 2008 to change the way it was computed. Regulators also were preoccupied with the biggest financial crisis since the Great Depression, and forcing banks to be honest about their Libor submissions might have revealed they were paying penalty rates to borrow, which in turn would have further damaged public confidence.

Libor is calculated daily through a survey of banks asking how much it costs them to borrow in 10 currencies for periods ranging from overnight to one year. The top and bottom quartiles of quotes are excluded, and those left are averaged and made public before noon in London.

Because it’s based on estimates rather than actual trade data, the process relies on the honesty of participants. Instead of being truthful, derivatives traders sought to influence their own and other firms’ Libor submissions, with their managers sometimes condoning the practice, according to documents and transcripts of instant messages obtained by Bloomberg.

Occasionally, that meant offering financial inducements. “I need you to keep it as low as possible,” a UBS banker identified as Trader A wrote to an interdealer broker on Sept. 18, 2008, referring to six-month yen Libor, according to transcripts released on Dec. 19 by the U.K.’s Financial Services Authority.

Some former regulators say they were surprised to learn about the scale of the cheating. “Through all of my experience, what I never contemplated was that there were bankers who would purposely misrepresent facts to banking authorities,” says Alan Greenspan, chairman of the U.S. Federal Reserve from 1987 to 2006. “You were honorbound to report accurately, and it never entered my mind that, aside from a fringe element, it would be otherwise. I was wrong.” 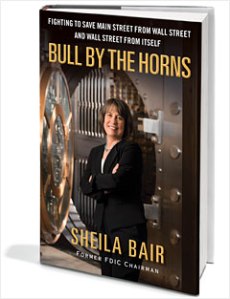 Sheila Bair, who served as acting chairman of the U.S. Commodity Futures Trading Commission in the 1990s and as chairman of the Federal Deposit Insurance Corp. from 2006 to 2011, says the scope of the scandal points to the flaws of light-touch regulation on both sides of the Atlantic. “When a bank can benefit financially from doing the wrong thing, it generally will,” Bair says. “The extent of the Libor manipulation was eye-popping.”

“That’s not all!”, says Bix Weir. “On December 10th the US Regulatory Agencies are expected to pass the Volcker Rule which takes the Banksters OUT of the market rigging game permanently!”
Wall Street Sweats Out Volcker Rule impact on Revenue

“With U.S. regulators scheduled to vote Dec. 10, the largest firms are getting little detail about the final terms of the Volcker rule’s ban on proprietary trades, and still have basic questions about what kind of market-making will be allowed, said three senior U.S. bankers. They’re also wondering whether they’ll have to change practices or curtail business in some less-liquid markets, the bankers said.”