The Center for Public Integrity posted a superb article by Reity O’Brien and Chris Young.

“At least five and perhaps as many as eight of the nine members of the U.S. Supreme Court are millionaires according to recently released financial disclosures, and only two hold any consumer debt.

Assets on the forms are reported in a range making it impossible to say precisely how much each justice is worth, but suffice to say, none of them are hurting financially.

“Ruth Bader Ginsburg boasts the highest potential net worth at $18.1 million with Stephen Breyer a close second at $17.1 million. Both were appointed by former President Bill Clinton. [DC Ed. Doesn’t look like Justice Ginsburg will be sitting in on any decisions regarding JPMorgan Chase] 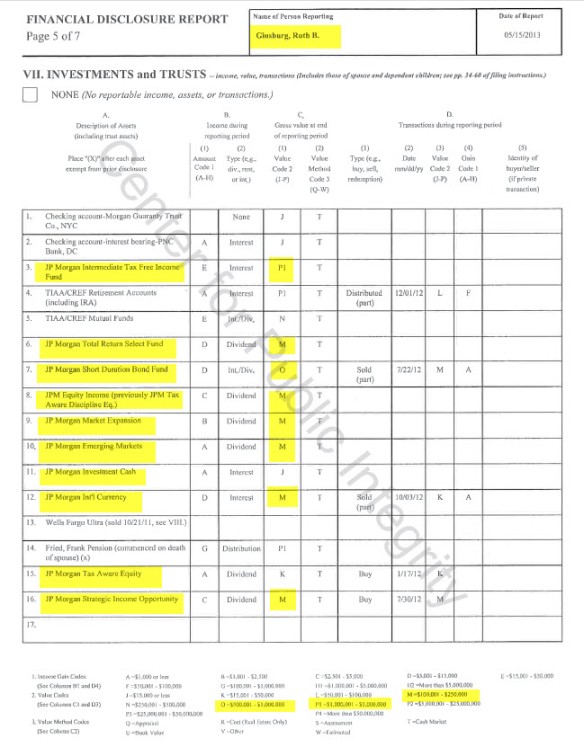 However, Ginsburg’s actual net worth may be as low as $4.4 million and Breyer’s as low as $5 million. Federal officials are also exempt from disclosing the value of their homes, making an accurate calculation even more difficult.

After collecting nearly $2 million in book advances, Justice Sonia Sotomayor’s assets rose to between $1.7 and $10.3 million, ranking her No. 3 in terms of highest potential net worth. Sotomayor is an appointee of President Barack Obama.

Chief Justice John Roberts, an appointee of former President George W. Bush, possesses one of the court’s most complex financial portfolios. His net worth is valued between $2.8 million and $6.6 million, ranking him No. 4.

As for the rest:

Justices make good money, though with their backgrounds they could easily earn much more in the private sector. Roberts, as chief justice, earns $223,500 per year, while the eight associate justices make $213,900.

But there are perks. Judges rake in tens of thousands of dollars from speaking fees, professorships and book deals.

Most of Ginsburg’s assets are held in mutual funds and retirement accounts. In 2012, Ginsburg earned nearly $26,000 for taking part in two separate university-sponsored events, including a two-week Wake Forest School of Law summer seminar held in Venice, Italy, and in Vienna, Austria.

The bulk of Breyer’s holdings are in mutual funds, retirement accounts and bonds. But one of Breyer’s two largest reported assets is a $1 million to $5 million stake in Pearson, the publishing company that owns the Penguin Group and The Financial Times. The justice collected between $15,000 and $50,000 last year in dividends thanks to his stock holdings in that company.

Breyer enjoyed a windfall last summer when he sold his stock in Amgen, Inc., the pharmaceutical company that was party in a case that came before the Supreme Court in its most recent term. In late September, just a month after he realized between $15,000 and $50,000 in gains by selling his Amgen holdings, the court docket noted that Breyer was no longer recused from proceedings related to the case.

Also notable is Breyer’s holdings in Tai Shan Fund which invests in tech companies in China, Hong Kong and Taiwan and is part of a Boston-based capital management firm led by investor Thomas Clafflin, according to a Bloomberg report.

Roberts has invested heavily in technology and telecommunications companies — some of which have had business before the high court. He also owns a mix of bonds, retirement accounts, mutual funds and shared ownership of a cottage in County Limerick, Ireland.

The top justice owns up to a total of $750,000 in shares of Time Warner, Microsoft and Texas Instruments and up to $200,000 in T-Mobile and Sirius XM Radio stock, according to his report.

Roberts recused himself from a patent dispute involving Microsoft, which the software giant lost in a unanimous 8-0 decision in 2011.

As the Center for Public Integrity reported last week, Justice Sonia Sotomayor’s disclosure is notable for the nearly $2 million she received in book advances and promotion for her memoir, My Beloved World, published by Knopf Doubleday.

One of Sotomayor’s most valuable assets is her former New York City residence, now a rental property valued between $1 million and $5 million, though she carries a mortgage on the property. Unlike most of her colleagues on the bench, Sotomayor reported a handful of liabilities in her disclosure, including between $250,000 and $500,000 for the rental. Her debts for four credit cards were each less than $15,000.

Scalia reported a debt of less than $15,000 for a loan on a life insurance policy.

Scalia also reported receiving between $5,000 and $15,000 in rent for a property he owns in Charlottesville, Va. His report also shows that he has investments in gold-related securities totaling between $80,000 and $215,000.

Scalia traveled frequently in 2012. In the “Reimbursement” section of his financial disclosure, he reports 28 trips to various schools and organizations to deliver speeches and lectures.

In most cases, the justice was provided or reimbursed for transportation, food and lodging. (Federal officials are not required to report how much they were reimbursed, either in exact amounts or in dollar ranges.) In September and October, Scalia gave speeches and lectures at five events hosted by the Federalist Society, a conservative nonprofit that advocates reform of the legal system.”  [Read more]

So, if you are wondering if another crash on Wall Street might have any impact on the US Supreme Court – just take a gander at the financial disclosure statements linked above.