We see all sorts of cases in foreclosure defense and just as many judicial personalities… goofy decisions, irresponsible and / or clueless judges but this one takes the cake! You would think that if you’re going to have your case heard by a trial judge – that he would be required to have some knowledge on the subject, right? Apparently, not in Hawaii’s Second Circuit Court.

A few years ago it appeared that many judges were just not up to speed on the foreclosure scheme, but lately it seems like there has to be a higher ilk that commands lower court to squash the homeowner and if they can afford to appeal, maybe then they’ll be worthy of some justice. Otherwise, presented with the evidence, acknowledging the bad paperwork and still ruling against the homeowner would be crazy or corrupt… or maybe both. This appears to be a case that would certainly seem to fit that synopsis. END_OF_DOCUMENT_TOKEN_TO_BE_REPLACED 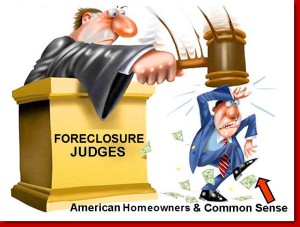 It’s just an observation, but it certainly appears that foreclosure judges have been given orders to squash homeowners like a bug at the lower court level and if they can afford to appeal – maybe, just maybe, they might get some fair and balanced justice. The process so far has been highly unbalanced. Whether foreclosure judges are just not competent enough to understand the securitization, rehypothecation and securities scheme, or whether they’ve been told by higher-ups that if they don’t rule against homeowners all their pensions will be lost or the economy will crash – it’s just a bizarre and pathetic state of mind. END_OF_DOCUMENT_TOKEN_TO_BE_REPLACED

Don’t think for a minute that this could not happen to you.  This is much more prevalent than you can imagine.

Barry Tatum returned to his home in Chicago in December to find that his front and back doors had been torn from their hinges, leaving his possessions exposed to the frigid winds that whipped through his neighborhood.

Terrified that he had been robbed, Mr. Tatum, who had fallen behind on his Bank of America mortgage, raced inside only to discover an unlikely source of the break-in, he END_OF_DOCUMENT_TOKEN_TO_BE_REPLACED