Some of the best tools we have ever encountered as litigation paralegals are on Bombards Body Language, a collection of dissected videos where the goal is to teach people to be able to identify and see deception in body language. Having watched Bombard’s video channels for several years – it recently became time to move up to tutorial instruction.

END_OF_DOCUMENT_TOKEN_TO_BE_REPLACED 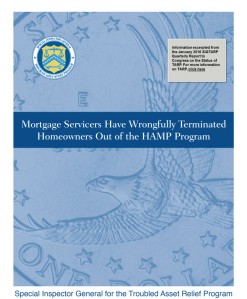 SIGTARP’s concerns over servicer misconduct contributing to homeowner redefaults in HAMP have been borne out. Treasury’s findings in its on-site visits to the largest seven mortgage servicers in HAMP over the most recent four quarters show disturbing and what should be unacceptable results, as 6 of 7 of the mortgage servicers had wrongfully terminated homeowners who were in “good standing” out of HAMP.

Sense on Cents:  One of the best lines I ever read in The Wall Street Journal was attributed to then CEO of First Boston Allen Wheat. When asked about a senior executive who had recently departed the firm, Wheat rhetorically inquired and responded, “How do you know when he is lying?” “His lips move.”

Regrettably, couldn’t we say the same about so many of our so called political and business leaders? I think there is little doubt.

Life in and around Washington, Wall Street, and elsewhere in America now seems much more to revolve around rationalization than integrity. With the media often complicit in allowing the lying to go fully unchecked, our society suffers. Against this backdrop, I am very excited to pick up a copy of a book scheduled to be released tomorrow entitled 935 Lies: The Future of Truth and the Decline of America’s Moral Integrity written by a new Sense on Cents favorite but longstanding journalistic giant Charles Lewis. END_OF_DOCUMENT_TOKEN_TO_BE_REPLACED

And then they get caught?! No sense of consequence.

Failing to be honest costs a lot of money… omitting the truth is just as bad as lying.

Government extracts $2 billion in fines from JPMorgan in Madoff case

Years of high investment returns at Madoff Securities left bankers in the London office of JPMorgan Chase skeptical of the methods of company chief Bernard L. Madoff. While the bank reported its suspicions to British authorities in 2008, it never said a word to anyone in Washington, the Justice Department says.On Tuesday, Madoff’s primary banker agreed to pay federal prosecutors and regulators more than $2 billion to resolve criminal charges that it failed to alert the government about Madoff’s Ponzi scheme. [Read more HERE]