he protest movement called Occupy Wall Street has struck a nerve. The demonstrators’ goals may be vague, but their grievances are very real. If our country is to break out of this horrendous recession and create the millions of jobs we desperately need, if we are going to create a financially-stable future, we must take a hard look at Wall Street and demand fundamental reforms. I hope the protesters provide the spark that ignites that process.

The truth is that millions of Americans lost their jobs, their homes and their life savings because of the greed, recklessness and illegal behavior of Wall Street. Even Federal Reserve Chairman Ben Bernanke agreed when I questioned him this week at a Joint Economic Committee hearing that that there was “excessive risk taking” by Wall Street. Bernanke also said the protesters “with some justification” hold the financial sector responsible for “getting us into this mess” and added, “I can’t blame them.” 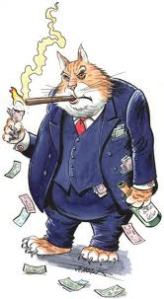 The demonstrators and millions of sympathetic Americans understand that odds are stacked in Wall Street’s favor because of the extraordinary economic and political clout of the big banks. Believe it or not, the country’s six largest financial institutions (Bank of America, CitiGroup, JP Morgan Chase, Wells Fargo, Morgan Stanley and Goldman Sachs) now have amassed assets equal to more than 60% percent of our gross domestic product. The four largest banks issue two-thirds of all credit cards, half of all mortgages, and hold nearly 40 percent of all bank deposits. Incredibly, after we bailed out the behemoth banks that were “too big to fail,” three out of the four are now even bigger than before the financial crisis.

Not only do these financial institutions have enormous economic clout, their wealth makes them an extremely potent political force. From 1998 through 2008, in order to achieve their goal of repealing Glass-Steagall and other financial regulations, they spent more than $5 billion on lobbying and campaign contributions. They also spent hundreds of millions to water down last year’s Dodd-Frank reform bill. After the law was passed, hundreds of millions more were spent to repeal provisions and weaken regulations. They never give up.

Where do we go from here? How do we convert the protesters’ enthusiasm into concrete results?

For starters, we should break up the giant financial institutions. Left to their own selfish 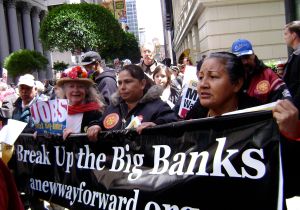 devices, Wall Street bankers will continue to gamble with other people’s money. Sooner or later, when their bets go wrong, they will come back to Congress asking to be bailed out again. Why not nip that in the bud? There also is a sound economic argument against too few owning far too much. The idea that six giant financial institutions can exert such enormous control over the economy should frighten anyone who believes in a competitive free-market system. Good Republican presidents like William Howard Taft and Teddy Roosevelt broke up Standard Oil, the railroad trusts and other huge monopolies a century ago. Now is the time for us to end the financial oligarchy that has been so destructive to our economy. If a bank is too big to fail, it is too big to exist.

Wall Street reform also must address the powerful and secretive Federal Reserve. A Government Accountability Office audit that I requested found that the central bank provided $16 trillion in revolving, low-interest loans to every major financial institution in this country, multi-national corporations, and some of the wealthiest people in the world.

The Fed even helped bail out other central banks around the world. When Wall Street was on the verge of collapse, the Fed acted boldly. Today, with the middle class collapsing, the Fed must act with equal vigor.

Real unemployment is more than 16 percent. Median family income has declined by $3,600 over the last decade. A record 46 million Americans live in poverty. The gap between the very rich and everyone else, the widest of any major country, is growing wider.

Under emergency provisions already in law, the Fed has the authority to provide low-interest loans to small businesses that are starving for capital so that they can create the millions of jobs our economy needs. It should do so.

The Fed also has authority to make credit card issuers stop bilking consumers with sky-high fees and interest rates of 30 percent or more. Especially in a recession, working people use credit cards to stretch their paychecks for basic needs. Usury is already regarded as a sin in the eyes of every major religion. It should be a crime. The Fed has the authority to limit interest rates and fees. It should do so.

The Occupy Wall Street demonstrators are shining a light on one of the most serious problems facing the United States: the greed, recklessness and power of Wall Street. Now is the time for the president and Congress to follow that light – and act. The future of our economy is at stake. Bernie Sanders is a US senator from Vermont.

For more on OccupyWallStreet go to and sign up for news and updates on: