It was midnight Sunday. I couldn’t sleep.  NY Times emails me an alert to Gretchen Morgenson’s article about how the Obama “I only care about the banks” Administration is trying to negatively influence the NY AG (my hero) Eric Schneiderman who is gunning after the Wall Street banks for their foreclosure fraud and Ponzi scheme that collapsed our country. I was angry, tossing and turning all night thinking about how I would blog my emotions. When I awoke there were several other well-respected bloggers that expressed my feelings for the leader of the unemployed, homeless, “free” world better than I ever could.
Attorney General of N.Y. Is Said to Face Pressure on Bank Foreclosure Deal

In recent weeks, Shaun Donovan, the secretary of Housing and Urban Development, and high-level Justice Department officials have been waging an intensifying campaign to try to persuade the attorney general to support the settlement, said the people briefed on the talks.

Mr. Schneiderman and top prosecutors in some other states have objected to the proposed settlement with major banks, saying it would restrict their ability to investigate and prosecute wrongdoing in a variety of areas, including the bundling of loans in mortgage securities.

But Mr. Donovan and others in the administration have been contacting not only Mr.

Schneiderman but his allies, including consumer groups and advocates for borrowers, seeking help to secure the attorney general’s participation in the deal, these people said. One recipient described the calls from Mr. Donovan, but asked not to be identified for fear of retaliation.

This doesn’t even qualify as competent three card monte. “No, don’t look at what we are trying to do for the banks. Really, all we care about is homeowners!”

It is high time to describe the Obama Administration by its proper name: corrupt.

Admittedly, corruption among our elites generally and in Washington in particular has become so widespread and blatant as to fall into the “dog bites man” category. But the nauseating gap between the Administration’s propaganda and the many and varied ways it sells out average Americans on behalf of its favored backers, in this case the too big to fail banks, has become so noisome that it has become impossible to ignore the fetid smell.

The Administration has now taken to pressuring parties that are not part of the machinery reporting to the President to fall in and do his bidding. We’ve gotten so used to the US attorney general being conveniently missing in action that we have forgotten that regulators and the AG are supposed to be independent. As one correspondent noted by e-mail, “When officials allegiances are to El Supremo rather than the Constitution, you walk the path to fascism.” 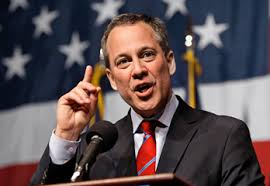 masters the banksters” club. Schneiderman  was the first to take issue with the sham of the so-called 50 state attorney general mortgage settlement. As far as the Administration is concerned, its goal is to give banks a talking point and prove to them that Team Obama is protecting their backs in a way that the chump public hopefully won’t notice.

The Administration joined this effort to hurry it forward and assure it resulted in a suitably financier-friendly outcome. And it has done so despite recent HUD inspector general’s audits finding that the five biggest servicers were defrauding taxpayers. We’ve heard not a peep of follow up on that front; instead, the Administration keeps leaking its tired “A settlement is just around the corner” story.

Schneiderman is far from the only person to see what a sellout this “settlement” is. The basic premise of a settlement is to obtain some sort of restitution to induce a prosecutor/plaintiff to drop a current or likely lawsuit. For the aggrieved party to get a good settlement, it needs to have a credible case, as in facts (a smoking gun or two) and a legal theory as to why those facts mean the perp is in hot water.

Aside from robosigning, which was all over the funny papers last year, the Administration and the AGs have made sure they have no facts. A member of the Administration who was involved in the settlement talks confirmed what we have long said on this blog: there was no investigation of any kind, despite Iowa attorney general Tom MIller’s lies claims to the contrary. They didn’t even bother getting to first base, namely making document requests.

And that is why at least some of the AGs are so uncomfortable with what is going on. Even though  Gretchen Morgenson of the New York Times focuses  tonight on the Administration’s efforts to leash and collar Schneiderman, he isn’t alone in having significant reservations. Beau Biden of Delaware is also making a broad-ranging

investigation, which is inconsistent with entering into a settlement.  Martha Coakley of Massachusetts and Catherine Masto of Nevada also have initiatives underway that are at odds with a settlement, and neither one looks interested in reversing course. We’ve also been told the Colorado AG may opt out of the deal.

And a story in the Wall Street Journal tonight suggests that this horse has already left the barn and is in the next county. Tellingly, Lisa Madigan, the Illinois AG, who is a political weathervane and was working closely with Tom Miller, has come forward and indicated she’ll at most support only a qualified release from liability, when the banks want a broad release. The article indicates that her view is shared by a fair number of the AGs. Per the Journal (hat tip reader Deontos):

“They wanted to be released from everything, including original sin,” said a U.S. official involved in the discussions. The legal protection sought by the banks included loan origination; securitization and servicing practices; fair-lending procedures; and their use of the Mortgage Electronic Registration Systems, an industry-owned loan registry that often acts as an agent for owners of mortgage loans…

“Those of us at the table…have maintained this investigation is about robo-signing and loss-mitigation problems,” Illinois Attorney General Lisa Madigan said in an interview. “The release should be narrowly drafted to cover those issues.”

Feds to AGs:  Can’t Touch This
posted by Adam Levitin

As this NYT story notes, the administration has been putting pressure on the AGs, particularly NY AG Schneiderman, for several weeks now, urging them to fall in line with the administration’s hear-no-evil, see-no-evil position on MBS and servicing fraud.  The NYT story makes it sound as if the feds were jolted into intervening because of pleas from the banks.  It’s enough to make one think that we’re back in 2005.

There are three things that particularly bother me about what’s happening.

First, is that if the Feds had shown some teeth on servicing, the AGs wouldn’t have to be the ones cleaning up the mess. The AGs are acting because the federal bank regulators are dancing to the same tune they were in 2000-2008: Can’t Touch This. (Now they’re saying to the AGs “Please, Hammer, Don’t Hurt ‘Em”.  Yuck, yuck, yuck.) Milquetoast consent orders (that impose costs on servicers without getting better servicing) and no criminal prosecutions so far other than of the garden variety warehouse fraud (Farkas et al.). It’s sad to see Shaun Donovan get in on this act, though, and then claim that his intervention was “motivated by a desire to speed up help for troubled homeowners.” Please.

Second, and what really galls me, is that the administration doesn’t have a serious alternative. The administration is flat out of ideas on servicing and has been so for at least a year. It’s not that there aren’t possibilities, but none are politically palatable to an administration that is terrified of rubbing Wall Street the wrong way. It’d be one thing if there were a plan. But the administration’s got nadda. Schneiderman’s intervention in the BNYM settlement isn’t holding up much needed servicing reform. That’s just nonesense. There’s nothing stopping BoA from entering into sub-servicing arrangements today if they wanted to.

It doesn’t take a great deal of intelligence to see that our President, the same President that the Black Caucus is disgusted with, has either been mentally hijacked or is incapable of understanding what is happening to America. His senior advisors, Geithner

and Bernanke have to go. Geithner has wanted the government to underwrite all of Wall Street’s bad loans for years.  We need a plan to stop the bleeding of foreclosure and unemployment across the country. The bubble has popped and the pus that pours out of the Oval Office is disgusting.  Wall Street is an infection, a plague.

How dare anyone pressure or try to persuade the AG’s from doing their job. Every Governor should be reeling over the scheme that cost them $$million, if not $$billions of lost retirement and pension trust fund dollars at the hands of masterful scammers. How dare Congress not be putting the hammer down on derivatives with regulation.

And as Yves remarked – why would this administration, with over 16% unemployment (higher than 30% in some cities) and MILLIONS upon MILLIONS of families who have lost their homes, savings and retirement, why, I ask you why – would administration officials who should be dealing with the really serious problems – be trying to strong arm and coerce the good guys?!  The AG Good Guys know the banks are not offering anywhere near enough money to take care of the damage they caused. Start with about $3 TRILLION for a settlement and see how many homeowners we can satisfy.

Its delusional to think that if we let the banks continue on their same path that everything will turn around. The final decline started in 2006 (and they ramped it up) – that’s quite a few years ago…and has it gotten any better?  I’d say its a lot worse this year than last.

Adam is right – there are too many people that have already lost everything.  This could have been corrected 3 years ago with a moratorium on foreclosures.  Instead Obama expressed that foreclosures were “good for America”. 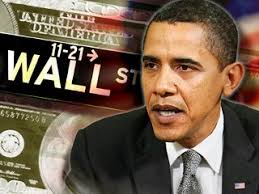 Well, Mr. President – even the  Democrats feel that you may not be good for America.  I wouldn’t worry though – I’m sure there’s a job waiting for you in corporate America – probably on Wall Street…if it’s still around at the end of your term.