The Most Popular Stock in  Congress

“One-fifth of the members of Congress own this company’s stock, making it the most popular investment among members of the House and Senate.

B) Bank of America (NYSE: BOA)

Have a friend that loves trivia? Pass it on!  Does anyone feel there may be a conflict of interest when lawmakers are invested in stocks of [Wall Street] companies that may (and do) fall under the regulatory oversight of the government?

One-fifth of the members of Congress own this company’s stock, making it the most popular investment among members of the House and Senate. The correct answer is “D”: General Electric (NYSE: GE) is the most popular stock in Congress.  Thanks to a series of rules in 1968 that required lawmakers and aides to publicly disclose information about their finances, anyone can now see exactly what our representatives are buying and selling.  House members outperform the average investor by 6.8% a year, so it’s safe to assume that they must be doing something different, right?

Actually, the most popular stocks held by Congress aren’t some “super secret” investments owned only by those in Congress with some inside knowledge of a future breakthrough. Instead, they’re large multinational corporations that make up the bulk of many average investors’ portfolios.

Click here to learn which Capitol Hill hot shots have the highest net worth: The 5 Wealthiest Members of Congress.

Does anyone feel there may be a conflict of interest when lawmakers are invested in stocks of [Wall Street] companies that may (and do) fall under the regulatory oversight of the government? How can a lawmaker regulate or make unbiased laws regarding a company he is in bed with?

Congress has written laws that allow them to make investments. When you sit on top of information that controls business and economy – and you make investments, isn’t that insider trading?  How can you not be influenced by the information you obtain?

House Speaker John Boehner doesn’t have as many millions as his predecessor, Nancy Pelosi, but like many new committee chairmen and other leaders, he has holdings in companies that have major financial stakes in the actions of Congress. For Boehner, that includes a portfolio of stocks in oil companies, financial firms, communication companies and pharmaceuticals. Holdings among other lawmakers include farmland, real estate and investments in high tech companies.

None of this violates congressional ethics rules. The rules state that members can’t use their official positions for personal gain and limits to $26,100 what they can earn as a director of a business or for actual work performed outside Congress. They, however, do not limit personal investments, a source of considerable wealth for many lawmakers.

What a great job!  Wouldn’t you love to take a job that allowed you to use inside information to make millions that was paid for by the taxpayers?  Depending upon your mindset you could become filthy rich while in office, wined and dined by lobbyists and then write a book about it.

OMG – we should all run for office and spread the wealth! Maybe that’s why Congressional House representatives were only given 2-year terms – maybe they need to change every 2 years and our forefathers knew it! 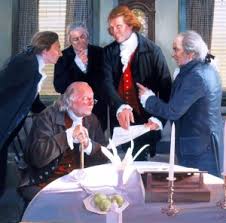 The framers of the Constitution designed the House of Representatives to be the most democratic body of the national government, as responsive as possible to the popular will. Compared to senators, members of the House represent smaller numbers of voters and serve shorter terms. The framers’ idea was to make congressmen more accountable to voters, and thus more representative of public opinion at any particular moment in time.

Think about it – take a hard look at your Congressional representatives, House and Senate, this year.  Look at their investments, income and assets… Maybe they’ve made enough money from their inside information and it’s time to replace them with someone who doesn’t yet know how the game is played and might really do some good…. like regulate derivatives.