Forget Failing Banks — Save More of Your Money with Credit Unions 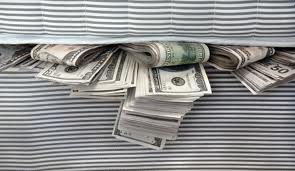 For many Americans, saving money involves depositing part of our paycheck into a bank savings account. Sure, some people stash their cash under the mattress, but most of us are members of a large national bank that we trust to keep our money safe.

Bank of America (NYSE: BAC). Wells Fargo (NYSE: WF). JP Morgan Chase (NYSE: JPM). These major banking institutions might have the best name recognition, but that doesn’t mean they’re giving you the best deals on loans, checking, or savings accounts. Nor does it mean that they’ll be around in another year. In fact, the top priority for these banks, like any business, is increasing their profits and lowering their expenses. What are their biggest expenses? Namely it’s advertising (hence the name recognition), overhead for their branches and interest payments to clients.

Credit unions, on the other hand, spend significantly less on these non-banking expenses, making them a great (and less expensive) alternative to major banks.

Banking at a credit union is almost identical to banking with an actual bank. You have to open an account to keep your money there, you can sign up for various services

(checking, CDs, IRAs, loans and saving plans) and both institutions will insure deposits (up to $250,000).

The second major distinction is that, unlike banks and many other financial institutions, credit unions are “not for profit.” They operate only to serve their members and use profits to cover expenses and make improvements. After that, excess earnings are used to offer members more affordable loan rates, higher returns on savings and lower fees on products and services.

In fact, according to the Credit Union National Association, in 2008, people saved $126 by belonging to a credit union instead of a bank.

In addition, opening an account with a credit union is just as simple as opening one with a bank. Bonus: The majority of credit unions will allow you to sign up with just a one dollar balance.

There are a few disadvantages to banking with a credit union. Unlike Bank of America, your local credit union may not have ATMs everywhere you go, and it’s unlikely that you’ll be able to find a branch far away from home. However, some larger credit unions belong to a nationwide system of 25,000 fee-free ATMs.

Another disadvantage: Only 68% of credit unions offer sophisticated services such as online banking and an after-hours call center for customer service. The number is growing, but if no online banking option is a deal-breaker for you, double check that your local credit union offers it.

But the biggest disadvantage of credit unions is that membership is not open to everyone. All of those low fees and incredible interest rates are only available to you if you meet the credit union’s qualifications.

Typically this means joining through your workplace or another organization you belong to. Sometimes it can be as simple as living in the right county or city. Either way, your local credit union will be happy to help you determine whether or not you’re eligible.

The Investing Answer: Credit unions have many benefits over traditional banks, so before you put your money into the large bank down the street, consider if a credit union could meet your needs just as well.