In a world where the American Dream and Wall Street greed collide, when your life and home are no longer your own, we must look beyond the facade of the documents and dig deeper into the public archives to seek the truth of the concealed path that is destroying our nation built on the rule of law, the slavery of the collateral consisting of people and land records so that a few may prosper while millions of others face peril. It may seem like an impossible battle – until NOW! There is one thing that they didn’t count on – knowledge and truth that will awake your hero and cause the fatal change in their course.

Rehypothecation is your sword – know it well!

You thought you entered into a mortgage loan contract – but you couldn’t have. If you dig into the archives of public documents and patents you’ll find that numerous flow mortgage and servicing agreements were linked to software programs long before you and your collateral were procured for securitization and rehypothecation. Securitization didn’t happen after you signed your fake mortgage loan documents – it happened long BEFORE!

other people – including hackers.

You, your social security number, your property, promise to pay and credit are collateral data. It might as well be tattooed or lodged in a chip in your arm. Privacy has flown the coop. You can opt-out but the custodians (who borrowed, pledged and sold it) cannot promise to get it back for you any time soon. Yes, you should be concerned and picking up your phone to scream at the top of your lungs to your Congressional representatives and U.S. Senators. Wake their butts up!

Privacy is a whole other post – for now, let’s get back to rehypothecation and why it is your best weapon.

Your collateral was pledged into rehypothecation slavery prior to your signing any documents. Remember this – it is a very important point.

There is an important legal distinction between rehypothecation and re-use in the repo market. In a pledge, title to collateral remains with the collateral-giver. This is a very important point.

For example, let’s take a New Century Mortgage loan and acknowledge the fact that New Century filed bankruptcy on April 2, 2007. New Century has entered into numerous contract agreements with various parties agreeing to procure loans to flow into the pre-existing securitization process. You, of course, are not informed of any of these details.

New Century unloads its haul of captured collateral to Lehman Brothers Bank pursuant to one of its agreements. It appears this is a “sale” – which is unclear because 2 years later in 2009 you try to modify your loan when your are drawn like a moth to the candle by phony HAMP promises and find yourself in default – not of your own doing. Upon default (which is 3-4 months after you were advised by the servicer to stop making payments in order to get a modification) it appears there is an insurance pay-off (not to you, of course). There also appears to be the “first” true sale… because before, as there is some confusion – especially when the originator has filed bankruptcy, it appears there were “transfers.”

Maybe our collateral is being used to substitute for the missing German gold bars? Maybe we should repatriate our collateral? Nothing is impossible. In any case, there is significant risk in rehypothecation – including the loss of collateral.

What makes this a double edge sword is that an untimely or late assignment may be the evidence of rehypothecation. Why is that of value? Think about this – in order to rehypothecate the collateral the must be a “securities” transaction in order to be pledged, swapped, traded, etc. If the collateral moves in its original form from the originator to rehypothecation before it enters a trust (which appears is always after default) – then we’re looking at mortgage and note documents as securities – from the very beginning …and very likely before. If we follow the “Yellow Brick Road” the documents, beginning with the 1003 loan application, were prepared to be rehypothecated and securitized long before the homeowner signed them. And without full disclosure the homeowner unwittingly entered into a securities transaction – by an unlicensed securities trader. These are not mortgage loans, are they folks? UCC Article 9, completely endorsed, with french fries, please.

We’re not in Kansas at the moment. Maybe the Emerald City was in cyberspace too. 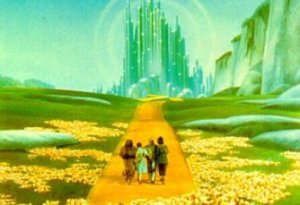 7 thoughts on “REHYPOTHECATION IS YOUR WEAPON TO ESTABLISH THERE WAS NEVER A MORTGAGE LOAN – THESE WERE ALWAYS SECURITIES!”