Yesterday was spent reading a brilliant new ebook ShellGame-MERS: Contrived Confusion by retired attorney/CPA Robert Janes. Not enough can be said about this powerful paper that accurately outlines the errors of the foreclosure machine. IT IS A “MUST READ”!

Robert Janes has previously written a  book called “Fighting The Foreclosure Machine” and has a website with the same name, with great newsletters contained therein.  It is all about the UCC and the material is in regard to making the banks prove who can enforce the Note.

This is fabulous information and used in a lot of Quiet Title actions and Oppositions to Motions for Summary Judgments.  Judges are starting to listen to these arguments which is to put a stop to the fabrication of documents and fraud stemming from the “foreclosure machine.”

Mortgage Electronic Registration Systems, Inc., (“MERS”) is a big problem for the foreclosure machine. Its problem is your opportunity. Learn why this is so and how to use the presence of MERS to your advantage.

ShellGame-MERS: Contrived Confusion is by the author of Fighting The Foreclosure Machine. Like the book, this paper is a plain-language legal treatise. You and your attorney can use it to help your judge make the correct decision. [CLICK HERE TO ORDER]

What you will find in this paper:

NOT LEGAL ADVICE: this paper provides information, not legal advice. Each person’s circumstances and facts are unique. You and your legal advisor must determine how, if at all, this information might benefit you.

Every foreclosure defense attorney and judge hearing these cases should read this paper and research the issues and symptoms of the “MERS Blur” disease. Documents substantiating the paper can be found in the footnotes and many are accessible on http://www.doctelportal.com in the LIBRARY under the MERS tab.

Whether or not you are in foreclosure – these issues affect you. The foreclosure machine is a “land grab” much like the takeover of Hawai’i. We’re about to lose our rights to own properties in the most egregious and aggressive elimination of our due process protection and destruction of our Constitution.

Lili‘uokalani was the last queen of Hawai‘i. Born in 1838, she lived through the nearly complete economic transformation of the islands. Lucrative sugar plantations (like the banks and the elite) gradually subsumed the majority of the land, owned almost exclusively by white planters, dubbed the “Sugar Kings.” Hawai‘i became a prize in the contest between America, Britain, and France, each seeking to expand their military and commercial influence in the Pacific.

The monarchy (like our individual states) had become a figurehead, victim to manipulation from the wealthy sugar plantation owners (Wall Street). Lili‘uokalani was determined to enact a constitution to reinstate the monarchy’s power but was outmaneuvered by the U.S. government. The annexation of Hawai‘i had begun, ushering in a new century of American imperialism. This is exactly what is happening to homeowners across the United States – and it will happen to you if you don’t watch out!

The takeover of Hawaii is a disturbing and dramatic story depicted with a cast of characters driven by greed, desperation, and miscalculation… Sound familiar? How the queen lost her kingdom says as much about America and its new era of overseas expansion as it does about Hawaii. [Source: Lost Kingdom: Hawaii’s Last Queen, the Sugar Kings and America’s First Imperial Adventure].

Now, the “land grab” has come to mainland America in a foreclosure machine meant to make a society of leasehold renters… Why? Because it appears Wall Street and the government are without enough 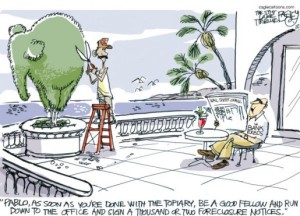 capital to sustain themselves and they need the land as assets – yours, mine and our family lands. In 1993, 100 years after the overthrow, the U.S. government issued an “Apology Resolution” to the people of Hawaii. The apology did nothing to guarantee the basic rights of indigenous Hawaiians, who continue to struggle against the colonial legacy of oppression. Is this what we want to happen 100 years from now – after it is over? After the United States is no longer a composition of individual states – but one huge land mass owned and controlled by only Wall Street, the elite and the Washington, DC government?

You need to seriously ask yourself – are you willing to allow your state to be consumed by a fraudulent foreclosure machine calculated with the intent and purpose to eliminate personal ownership in the land – so they can frack, strip the minerals, water and air rights out from under us?!

If you doubt their intentions read the news propaganda [CLICK HERE] and the patents [CLICK HERE].  See the patents in DeadlyClear’s REMIC Armageddon on the Horizon? You will see Mortgage Electronic Registration Systems, Inc. is a significant instrument necessary in the land grab.

Morgan Stanley doesn’t see this shift to rentership as a temporary waypoint while the country sorts out its housing problems; it sees this as a fundamental shift in how the United States will define itself into the future.

“America is moving away from a home ownership society and towards a rentership society,” the company says in its 2011 report. Of course it is if the Wall Street elite have anything to do with it, given the foreclosure machine, the fraudulent use of the MERS Blur Gang and history itself.

Bottom-line is that the states must wake the hell up. Wake up your legislators and your state courts. Encourage them to read of Robert Janes ebook ShellGame-MERS: Contrived Confusion. Make it the topic of your conversations at community meetings and among friends and family. If you doubt how serious the land grab situation is – just ask any Hawaiian. Their land was taken away – and yes, they got some of it returned where they can lease it for 100 years – and then its over … no more theirs. Do you think they have a reason to be angry? Well, that is exactly what is happening with every fraudulent foreclosure.

What can you do? You can read ShellGame-MERS: Contrived Confusion and work as hard as possible to have every single MERS decision overturned. And if your legislators are not in agreement with you it’s time to replace them in the next election. CLICK HERE to download now:

9 thoughts on “ShellGame-MERS: Contrived Confusion – A MUST READ!”