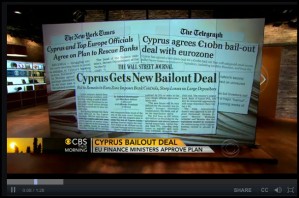 Cypriots have taken a significant haircut losings a significant portion of their deposits. Without the new deal, all depositors would have lost funds. By striking a deal at least depositors with under $100,000 will be “fully guaranteed”.

Cyprus, with the agreement of Eurozone finance ministers, dodged a disorderly sovereign default and unprecedented exit from the euro by bowing to demands from creditors to shrink its banking system in exchange for 10 billion euros (equivalent to $13 billion US) of aid to prevent its banking system collapsing and keep the country in the eurozone. All Cyprus banks will remain closed until Thursday, the central bank has announced in a shock statement.

CBS News reports that, “The nation of Cyprus is getting a $13 billion bailout, which calls for sweeping changes to the country’s economy and banking system.” Russia, who had many large investors in Cyprus banks, is not happy. Holly Williams reports – click here for CBS News video.

“Earlier, the authorities said all but two of the country’s largest lenders, Laiki and Bank of Cyprus, would reopen on Tuesday morning,” reports Aljazeera. “A withdrawal limit from ATMs of 100 euros ($130) a day are expected to continue.

Banks have been closed since March 16 to avert a run on deposits as the country’s politicians struggled to come up with a plan that would raise enough funds to qualify for an international bailout.”

A lot of American folks just struggling to keep the roof over their head, the electricity on and some food in the refrigerator (oh, yes and the car payment made) don’t really grasp the relevance of Cyprus yet and why it is so important to keep an eye on Europe’s financial status. We’re all tied together in one great big Gordian Knot of banking and financial hierarchy. For Cyprus it affects its euro partners and the International Monetary Fund to which the U.S. is connected.

It could happen here. One day you could go to the ATM or try to use your debit card at Walmart and “bingo!” no money – everything is frozen because your bank or its associated bank is about to go under. And until the regulators and the legislature get things worked out – your funds, if there are any left, are in limbo. Scary, isn’t it?  Especially when you are living paycheck to paycheck and everything is direct deposit.

Ever since the Wall Street securitization debacle during the first decade of this new century, the worldwide, interconnected monetary system has been held together with a printing press and toilet paper deals. Businesses are so over-leveraged and banks are struggling to get their asset and liability columns in order – that the economy can’t regain momentum or garner the confidence of the public to continue to invest.

This is why watching Cyprus and Europe is so important. As banks wind down, there could likely be a domino affect that could jump the pond from Europe and strike at the heart of the American financial institutions. The lack of confidence in the American banking system and Wall Street continues to grow daily. Perception is becoming reality. The “safe and a shotgun theory” is more of a reality than politicians are willing to admit. Thus, another reason why many Americans are not jumping on board with the weapons’ ban bills that are tormenting the US House and Senate.

Cyprus is a Reality

Laiki (Popular) Bank -Cyprus’ second-biggest – will be wound down and deposit-holders with more than 100,000 euros ($130,000; £85,000) will face big losses. Officials warn the island faces a deep recession with many businesses to shut down.

CNBC writes, “Art Cashin, director of floor operations at UBS, said traders had been dubious about the Cyprus deal, yet the world’s markets had initially rallied. “Everybody in every bank in every European country is going to ask how they are protected, and the answer is not at all,” he said.

Cashin discussed one theory that Cyprus had in effect already exited the euro because its banks can no longer act normally or attract deposit. Instead, depositors are prisoners, especially those with more than 100,000 euros who will be subject to losses and will not be able to freely move their funds.

Officials had said they would need strict controls on money transfers in and out of the economy for a period of time, and that basically cuts the country off from the euro zone’s financial system. Under the deal, there is 10 billion euros in financing for the government, and Cyprus Popular Bank is shutdown. That imposes steep losses on depositors of 100,000 euros or more. Bank of Cyprus will also be downsized, and big depositors there will also be hit. But small depositors and depositors at other banks will not take losses.

The size of the hit to large depositors may not be known for weeks. The drama began a week ago, when an initial bailout scheme included losses for all depositors, including those with insured deposits.”

Remember: “First come, first served”
Like the Billionaires dumping stocks – get it out of the banks now and invest in something tangible. Plant a garden, put solar on your roof – you may not want to leave those 401ks and mutual funds just sitting there because they may not be there when you need them most.