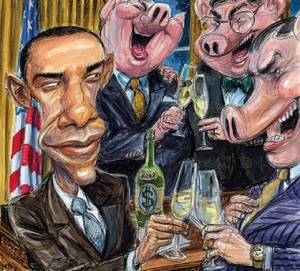 “Sneaky” comes to mind to describe the government and the banksters regarding two settlements between US banks and government regulators who alleged that the banks were guilty of widespread abuse of the foreclosure system that allowed banks to seize homes from defaulting borrowers. The banksters agreed to pay out more than $20 billion on Monday to resolve claims arising from the mortgage crisis.

Apparently, there are no great mathematicians in Congress or the Administration. These settlements aren’t really “huge.” It’s like class action lawsuits – it’s a lump some that (to the average person) sounds “huge” but in reality, spread over the entire class, it’s a cheap pittance. 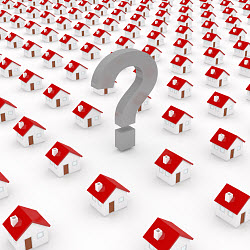 This $20 billion in settlement deals is to be paid for all the fraud caused by the banks. Somebody had to pull that number out of their keister. It’s not nearly enough to cover 84+ million defective, inflated, fraudulent, rigged LIBOR rate loans. It might cover 60,000 homes – but in reality there are millions! It’s a bad deal and it appears nobody in DC is doing the math. And they haven’t even specifically addressed the rigged LIBOR rates, yet.

If they can’t mathematically comprehend the reality, or more likely don’t want to admit the real numbers – instead of letting the banks off with an unrealistic figure that just sounds good – formulate a deal and apply it to everyone who mortgaged during 2003-2008.

US Banksters’ Malfeasance Bought and Paid for Rule of Law

Over five years after the financial crisis, BofA, the second-biggest US bank by assets, agreed to pay $11.6bn to Fannie Mae, the government-controlled mortgage company, to resolve lengthy and expensive legal battles over bad loans which in 2011, stemmed from regulators (including the Federal Reserve and Office of the Comptroller of the Currency) who found “critical weaknesses” in the procedures of the 14 mortgage servicers – including so-called “robo-signing” of legal documents. This lead to “unsafe and unsound practices and violations of applicable federal and state law and requirements”. 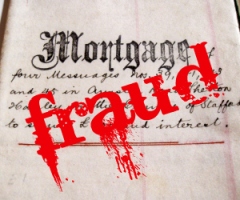 In a separate settlement, 10 mortgage lenders, including BofA, Wells Fargo, JPMorgan Chase and Citigroup, agreed to pay more than $8.5 billion to settle regulators’ allegations that they were “guilty of widespread abuse of the foreclosure system that allowed banks to seize homes from defaulting borrowers.”  See Financial Times for the full story – Banks near $10bn foreclosure agreement.

But what really makes these settlements putrid is the fact, as NakedCapitalism explains in OCC Foreclosure Reviewer: “Independent” Reviews Were Controlled by Banks, Which Suppressed Any Findings of Harm to Foreclosed Homeowners – the banks controlled the investigative process.  It was akin to getting caught speeding and the cop asking you how much you thought your ticket should be…better yet – it’s like Priceline.com – what do you want to pay?!

“You simply must read this post,” writes Yves Smith and we agree, “if you care at all about the rule of law or can stand to see the gory mechanisms by which “regulation” has now become a fig leaf for criminal corporate conduct…

Reader Luxtexente submitted this comment yesterday, describing his experience as a Claim Reviewer for one of the 14 servicers, in theory working under the direction of Promontory Group and the OCC. He makes clear, contrary to other banks, which hired very junior people who had little understanding of real estate law and foreclosure procedures (see Adam Levitin and Abigail Field for examples) or foreclosure review firms who held themselves out as experts but have yawning gaps in their knowledge, that he and many of the other reviewers he worked with were very well qualified to screen servicer records. He describes how these reviews were systematically gutted.

Remember, the review firms were supposed to be independent, selected according to criteria set by the OCC and paid for by the banks, but supposedly not accountable to them. We had dismissed that idea early on as ridiculous. From a May 2011 post:

But as Luxtexente tells us, it was much worse than that. It wasn’t simply that the consulting firms airbrushed out unflattering findings so as not to ruffle their current and hoped-for future meal tickets. 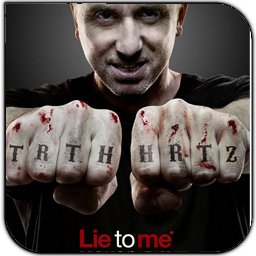 The banks were actively involved in overseeing the project and the results were shameless rejection of any and every possible basis for borrowers getting recompense. He provides numerous examples of unquestionably abusive conduct, such as foreclosing on homeowners in non-judicial states without advertising the notice of sale as required by law, or failing to send a notice of acceleration. Enough of the reviewers understood state law requirements that they would find many, often over a dozen, violations on a single file. So how did the bank and the OCC conspire to solve this problem? They redefined the review process so as to omit matters of law. I am not making this up.

This is what corruption looks like at the operational level. I suggest you read this piece closely; it’s chock full of damning tidbits. For instance, Luxtexente gives us one reason why the cost of this process got to be so high: he and his colleagues were being paid early on to do nothing.”  Read more.

“The reviews, conducted by external consultants, found no evidence of widespread harm to borrowers but the cost of examining extensive documentation meant regulators and banks decided it was better to agree a general financial settlement and cut the reviews short,” penned Financial Times. Well, of course they didn’t because the banksters were controlling  the reviews. As reader Luxtexente tells us:

“We were supposedly independent contractors, but we worked directly under bank and lenders authority and supervision. Any findings we made were quality controlled by the bank. Any findings we made came directly under the scrutiny of the bank. Any arguments over our findings, and whether they should be changed or not could and often did result in termination from the program without cause or warning and we had no recourse because we were contractors.” 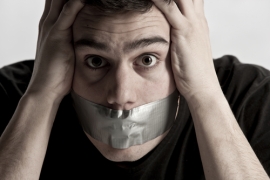 State laws were being violated and Claim Reviewers were concerned that as they delve into the files they found a dozen or more violations of the foreclosure laws with a specific file.

The situation was becoming heated as Claim Reviewers began finding more and more issues of law, not to mention, incompetence, and immorality and poor judgment. These concerns were brought to the managers attention and created tension between the bank manager and the Claim Reviewers.

“However,” says Luxtexente, “the bank and the OCC did find a solution. Take the questions out of the tests we were doing that asked about issues of law. So one test that had 2200 investigative questions (there are about a dozen tests for a file review) now became about 550 questions. Issues of law were removed. At another of our group meetings we were told that if a borrower did not specifically cite the law or statute that was violated in their complaint that we were not to address a violation of law found in the file as it was now irrelevant to the issues at hand.

When the questions was asked “how is a borrower going to know if a specific law or statute was violated since they are not trained in the law” the answer was that we only address what the borrower specifically complained about. The problem was that usually a borrower only had a feeling they got shafted somehow, but did not specifically know how. The complaint form also didn’t mention to the borrower that they had to be specific about issues of law. The form only asked generic questions about what happened.” 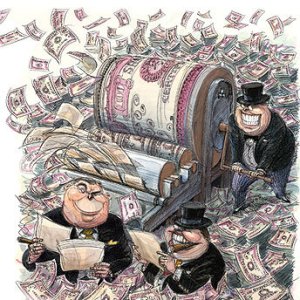 These settlements are a smoke screen and pretty much worthless. The banks cheated on the tests and there is not enough money to achieve any real compensation for the homeowners. The real moral hazard still lies with the banks. Apparently, very few in Washington are doing the math – but  Reps. Darrell Issa (R-Calif.) and Elijah Cummings (D-Md.) said they want to know more about the deal before it’s finalized. And they certainly should!

In a letter to Comptroller of the Currency Thomas Curry and Federal Reserve Chairman Ben Bernanke last Friday, the Congressional Representatives said, “[W]e would like more information about how the potential settlement amount is to be determined in light of potential wrongdoing identified to date, how such aid may be distributed and in what form, and what may happen to homeowner files that are still awaiting review.”

Issa and Cummings have requested “a staff briefing prior to the conclusion of the reported settlement agreement,” which could be announced as early as Monday, per The Hill.

Let’s face it – these big dollar settlements are merely sound bits – they are not large enough to do any good because there are several TRILLION dollars of fraudulent mortgage debt and malfeasance committed by the banks. 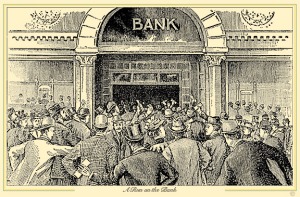 The banks cannot afford to rescind all the loans fraught with fraud and inflated appraisals, fraudulent assignments of mortgage, forgeries and rigged LIBOR rates – they’d be looking at another bankrun.

So, let’s look at a more equitable approach and make it available to anyone that mortgaged or refinanced a home from 2003-2008…not just those in foreclosure. Many people who are not in foreclosure may have no idea what’s in store for them or where their loan may actually be…’cause it’s very likely its not with the bank they think it is. We need a game changer. 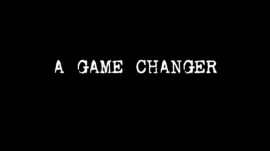 The penalty for fraud and malfeasance should be to strip the rigged LIBOR interest rates away – across the board… that means EVERY homeowner, apply all the borrowers’ payments to the principal, and reduce the principal 35-45%. The foreclosure abuses, inflated appraisals and rigged LIBOR would no longer be a problem and homeowners could begin to find new mortgages without the Ponzi scheme attached. It is a much more balanced and equitable approach – especially for the mathematically challenged.

The majority of homeowners are not looking for a free house – but they want compensation for the Ponzi scheme they were lured into, the loss of equity and the abuse of the foreclosure process that ripped their families apart and caused extreme emotion distress. And we all want to stabilize the economy.

5 thoughts on “Banks Get To Name Their Own Price – Independent Foreclosure Review More Like Priceline.com”