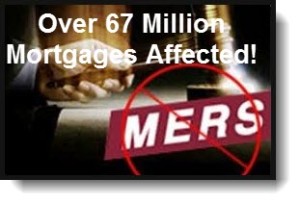 Finally, the Rule of Law is followed by the brilliant masters of the Washington state Supreme Court system. Yea! This ruling affects over 67 million MERS mortgages – whether in foreclosure or not.  As good as it is – there are still more facts that need to be adequately plead and addressed by the Court(s).

The Washington Supreme Court ruled unanimously today in Bain (Kristin), et al. v. Mortg. Elec. Registration Sys., et al., No. 86206-1 defining the statutes to determine that MERS (Mortgage Electronic Registration Systems, Inc. – the mortgage industry’s controversial document-recording system) was not entitled to be a beneficiary in Deed of Trusts and
might have violated state consumer protection laws. Washington is among the majority of Deed of Trust states in the Ninth Circuit – Hawaii being the ONLY Mortgage lien state (there is a difference). The Washington Supreme Court determined the question the federal court has asked:

“1.      Is Mortgage Electronic Registration Systems, Inc., a lawful “beneficiary” within the terms of Washington’s Deed of Trust Act, Revised Code of Washington section 61.24.005(2), if it never held the promissory note secured by the deed of trust?”

“we answer the first certified question “no.””

The decision, authored by Justice Tom Chambers, stated in part:

“MERS argues we should be guided by Cervantes v. Countrywide Home Loans, Inc., 656 F.3d 1034 (9th Cir. 2011). In Cervantes, the Ninth Circuit Court of Appeals affirmed dismissal of claims for fraud, intentional infliction of emotional distress, and violations of the federal Truth in Lending Act and the Arizona Consumer Fraud Act against MERS, Countrywide Home Loans, and other financial institutions. Id. at 1041. We do not find Cervantes instructive.Cervantes was a putative class action that was dismissed on the pleadings for a variety of reasons, the vast majority of which are irrelevant to the issues before us. Id. at 1038. After dismissing the fraud claim for failure to allege facts that met all nine elements of a fraud claim in Arizona, the Ninth Circuit observed that MERS’s role was plainly laid out in the deeds of trust. Id. at 1042. Nowhere in Cervantes does the Ninth Circuit suggest that the parties could contract around the statutory terms.” [Ed. Emphasis added] 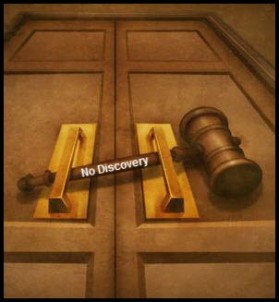 Cervantes is a miserable little “Deed of Trust” case that judges in Hawaii and elsewhere have apparently misinterpreted since its inception. To plead fraud in these cases (as in most cases) there is a dire need for discovery due to the purposely convoluted scheme.  However, the courts have continually allowed the banks to stall and abuse the discovery process.

Pleading fraud in specificity is a special task and apparently some details about MERS were not plead in this case either.

MERS has a tale to tell in the public documents that few attorneys have taken the time to dissect and study properly – but appear to point to the deception which the Court in Bain took the time to define and left the door open stating:

To prevail in an “unfair or deceptive act or practice” the Court states:

Not surprising that the Court determined that the 3rd question of whether an “unfair or deceptive act or practice” could be pursued:

“We answer the third question with a qualified “yes;” a CPA action may be maintainable, but the mere fact MERS is listed on the deed of trust as a beneficiary is not itself an actionable injury.”

THE TELLTALE TRADEMARK OF MERS®

When you research the trademark docs, and the business registration docs and then you compare the information to the William Hultman and R. K. Arnold depositions… and this is what you get: 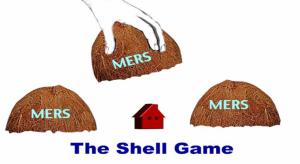 Then there was a name change of Mortgage Electronic Registration Systems, Inc. (II) to MERSCORP, Inc. on or about December 1998 which was to become effective as of Jan 1999. See the documents on DeadlyClear.

This appears to mean that the MERS® belongs to MERSCORP, Inc. and it became ‘the 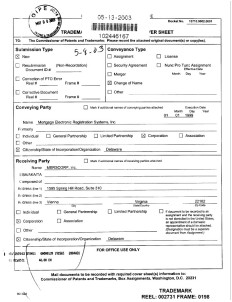 system’ that was licensed for members’ use (the banksters were/are the members).

Shortly after the name change, MERSCORP, Inc. created yet another Mortgage Electronic Registration Systems, Inc. (III) (per Hultman) which is the “Mortgage Electronic Registration Systems, Inc.” (strawman) in the mortgage contracts (not MERSCORP, Inc.; and, the “MERS” reference in the mortgages is just an acronym – not the registered trademark MERS®).

However, it appears MERSCORP, Inc. and the “system” are actually in the mortgage contracts but never disclosed to the borrower – the MIN # belongs to MERS® ‘the system’, not to the strawman “Mortgage Electronic Registration Systems, Inc.” (III) or its acronym MERS.

The Trademark Documents (can be found in this Post) that were used in a lawsuit against a California company help to support the timeline… this scenario wasn’t used by the CA defendant. Perhaps it was so convoluted nobody ever figured it out – it was likely meant to be confusing on purpose. 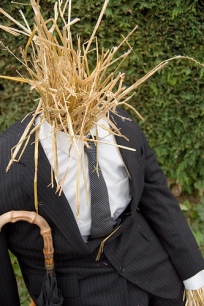 Bottom-line, it appears that there were 3 Mortgage Electronic Registration Systems, Inc. companies, 2 companies were absorbed by MERSCORP, Inc., along with the acronym “MERS” found in the mortgages which is the “strawman/trade name Mortgage Electronic Registration Systems, Inc.” (no employees or software systems, basically a shell) – it is not MERSCORP, Inc.’s MERS® (the “system”).

There have been no records of agreements, contracts, licensing, or assignments of license that have been produced or found filed in any business records in DE, NY, MI or Virginia or the patent office that has been able to link the Strawman or any other corporation to the MERS®.

How does this affect the borrower and it is a fraud?

It was the MERS® system that actually dictated in its rules (with the membership of banksters) the recordation of the mortgage and the flow of the note. Moreover, the software “system” belonged to MERSCORP, Inc. under which is the entity that all of the banks’ “officers” performed the execution of paperwork – not the strawman Mortgage Electronic Registration Systems, Inc.

Was Mortgage Electronic Registration Systems, Inc. a legal entity or just a trade name?  If

it was merely a strawman covering for the “real” MERS® how can it assign or become a mortgagee?

Courts have distinguished the roles of trade names, for example AMERICA WHOLESALE LENDER v. PAGANO stating,“We conclude that, because a trade name is not an entity with legal capacity to sue, the corporation has no standing to litigate the merits of the case.”

“An assignee, however, may not commence an action solely in a trade name either, regardless of the entity to which the trade name applies, because a trade name is not an entity with the legal capacity to sue.  Nor could Countrywide cure the jurisdictional defect by substituting a party with the legal capacity to sue on behalf of the trade name.  The named plaintiff in the original complaint never existed.  As a result, there was no legally recognized entity for which there could be a substitute.” [. . .]

[. . .] Furthermore, because America’s had no standing to bring an action, no action in this case ever was commenced, as it was void ab initio.  In the absence of standing on the part of the plaintiff, the court has no jurisdiction.

Jan van Eck, a colleague and brilliant (Phi Beta Kappa) mind in foreclosure defense, dissected and explained it this way:

“You have this MERS outfit set up as a subsidiary of MERSCORP, INC. Then in 1999 MERS gets amalgamated into MERSCORP, INC. Oops. From that point onward, any Filings ostensibly made in the name of “MERS” as spelled out in full in that cumbersome name no longer reflect the actual entity, but something else (which does not exist). So, it appears the implication of this is that all those “Assignments” and “Substitutions” signed by so-called Officers of MERS in the name of MERS instead of MERSCORP, INC all become worthless. That means that the Note and DOT still sit with the “original lender,” except that that entity is likely either bankrupt, closed up shop, or paid off and no longer has an interest in the Obligation – and thus cannot grant either a transfer or a release of debt.

What this means is that the “new entity” with the phony MERS papers cannot do anything. They are stymied, as they are attempting to advance an interest from an entity that has no temporal existence. “MERS” cannot assign or substitute anything; there is no MERS, and to the extent they manufacture one, there are no Officers or Employees, so the signatures are invalid.

With invalid Instruments alleging transfers, you have no ability to get Standing before the Court, and the Court has no Jurisdiction. Again, these are bedrock issues; a bit like the proverbial tar-baby, they stick to you and just do not go away.

Nor [if the Rule of Law is followed] is there any possibility of doing a “do-over,” or re-filing in some other name. The problem this creates is that there are already various Transfers and Substitutions recorded on the land records. How do you get around this – by saying “Sorry, we tried to defraud the Courts and the record system, you caught us, so here, try this second attempt?” Nope. No chance. Having once committed themselves to one posture, that of MERS, it becomes impossible to file a second set of Assignments and Substitutions in the name of MERSCORP. At that point you have serious issues of what document is authentic. [Ed. note – Time to check out “who’s on your mortgage??”]

So, these guys have hanged themselves. They created this big Gordian Knot and there is no

way to slice it open. They are seriously hung, and not in the sense that they can brag about. These guys are toast.

This is all basic, bedrock, foundational law, MERS cannot sign documents as there is no MERS, anything they signed and filed is without foundation and is manufactured to wreak a deception upon the Court to gain advantage to which the entity is not entitled to, and under the equitable principles of Keystone Driller, 290 US 240, at 245, the doors to the court house are to be shut in limine, their cause cannot be heard, and they shall gain nothing.”   Thanks, Jan.

The door is open for the fraud – all we need to do is study the facts and plead them correctly.  Talk soon to an attorney near you.

Mahalo! [Thank you] Justice Chambers.  Homeowners across America owe you a debt of gratitude for having the aloha, intelligence and ability to handicap the facts like a thoroughbred horse race in this convoluted process and foreclosure nightmare that left America depressed, homeless and broke.

Hawaii loves you – especially Maui! We hope you’ll continue to visit us here for years to come. Maybe you’d like to come back soon and talk story with some our our judges – especially in the 2nd Circuit.

Justice Chambers, 68, has served on the court since 2000 and will be retiring at the end of the year. When he was re-elected in 2006, he insisted that his next term would be his last. Read more here:

And a Special Thank You to the concurring judiciary:

Hey, Barry –
Are you ready to call a moratorium on foreclosures, evictions and deficiencies yet?
~~~~~~~~~~~

Are you subscribed to DeadlyClear yet? It’s good stuff and it’s FREE.

25 thoughts on ““MERS is not a “holder” under the plain language of the statute,” says the Supreme Court of the State of Washington”