The majority of loans were issues by the Federal Reserve Bank of New York (FRBNY).

“From late 2007 through mid-2010, Reserve Banks provided more than a trillion dollars … in emergency loans to the financial sector to address strains in credit markets and to avert failures of individual institutions believed to be a threat to the stability of the financial system,” the audit report states.

“The scale and nature of this assistance amounted to an unprecedented expansion of the Federal Reserve System’s traditional role as lender-of-last-resort to depository institutions,” according to the report.

In 2009 Senator Bernie Sanders put Ben Bernanke, Chairman of the Federal Reserve, on the hot seat and asked pointed questions of exactly where the money went and vowed that Congress would investigate.  This week we have some of the answers. Listen to “Audit the Fed” click here.

I gathered comments from bloggers all over America. This was clearly a non-partisan issue. Some of these comments were found on right-wing blogs and others on the left and centrist. The politics didn’t matter – the consensus is that the public is reeling.  The 2012 elections promise to be pretty exciting.  Bluntly put: America is pissed.

The first ever GAO (Government Accountability Office) audit of the Federal Reserve was carried out in the past few months due to the Ron Paul, Alan Grayson Amendment to the Dodd-Frank bill, which passed last year. Jim DeMint, a Republican Senator, and Bernie Sanders, an independent Senator, led the charge for a Federal Reserve audit in the Senate, but watered down the original language of the house bill (HR1207), so that a complete audit would not be carried out.

Ben Bernanke and various other bankers vehemently opposed the audit and lied to Congress about the effects an audit would have on markets. Nevertheless, the results of the first audit in the Federal Reserve’s nearly 100 year history were posted on Senator Sander’s webpage.

What was revealed in the audit was startling: $16,000,000,000,000.00 had been secretly given out to US banks and corporations and foreign banks everywhere from France to Scotland. From the period between December 2007 and June 2010, the Federal Reserve had secretly bailed out many of the world’s banks, corporations, and governments.

The Federal Reserve likes to refer to these secret bailouts as an all-inclusive loan program, but virtually none of the money has been returned and it was loaned out at 0% interest. Why the Federal Reserve had never been public about this or even informed the United States Congres

s about the $16 trillion dollar bailout is obvious — the American public would have been outraged to find out that the Federal Reserve bailed out foreign banks while Americans were struggling to find jobs.

The list of institutions that received the most money from the Federal Reserve can be found on page 131 of the GAO Audit and are as follows..

Take all of the outrage and debate over the $1.5 trillion deficit into consideration, and swallow this Red pill: There was no debate about whether $16,000,000,000,000 would be given to failing banks and failing corporations around the world. 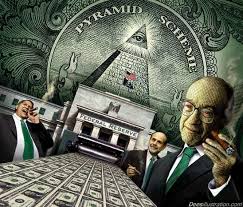 In late 2008, the TARP Bailout bill was passed and loans of $800 billion were given to failing banks and companies. That was a blatant lie considering the fact that Goldman Sachs alone received 814 billion dollars. As is turns out, the Federal Reserve donated $2.5 trillion to Citigroup, while Morgan Stanley received $2.04 trillion. The Royal Bank of Scotland and Deutsche Bank, a German bank, split about a trillion and numerous other banks received hefty chunks of the $16 trillion.

Americans should be swelled with anger and outrage at the abysmal state of affairs when an unelected group of bankers can create money out of thin air and give it out to megabanks and supercorporations like Halloween candy. If the Federal Reserve and the bankers who control it believe that they can continue to devalue the savings of Americans and continue to destroy the US economy, they will have to face the realization that their trillion dollar printing presses will eventually plunder the world economy.

4 thoughts on “Hats Off to Bernie and the Gang: First Federal Reserve Audit Reveals Trillions in Secret Bailouts”