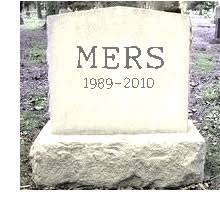 HAWAII – In today’s episode following “Look Out Lenders – MERS is About to Take You Down!” the Hawaii bankruptcy court ruled that the Trustee’s hypothetical lien theory held enough water to maintain life in the Motion to Compel the Trustee to Abandon the property.  The lender, American Savings Bank FSB, (ASB) and the Trustee have been in settlement discussions. Either way – the MERS demise is set into motion. The judge denied the motion WITHOUT prejudice in order that it could be brought back at some future date, if necessary.

Highlights of the hearing:

JUDGE:  The Trustee has come up with a theory that, at least in the Trustee’s view, might result in an avoidance of the mortgage altogether and its hard to set a deadline in getting that resolved…

TRUSTEE:   ASB had assigned the mortgage to MERS, they hold the note they don’t have the mortgage so I would think that a hypothetical lien creditor could step in and sell the property…    (Editor’s note: actually they might not have the note either)

JUDGE:  I will deny the motion at this point without prejudice at it being renewed by anybody when they think it’s appropriate to do so…[…] …I’m not going to wade into the MERS issue one way or another at this point hahaha (Judge chuckles)… ahhhh’ve so far managed to avoid that one unlike most of my colleagues…

Aside from the bankruptcy issue there is a Federal Complaint filed against the lender, MERS and MERScorp, Inc. by the homeowners alleging several counts including antitrust and misrepresentation that the Trustee’s theory actually supports.  In an Opposition to Defendants’ Summary Judgment filed last Monday homeowner Plaintiffs allege:

“Not only is there material fact with the assignment of March 11, 2011 that the mortgage and the note were bifurcated, Defendants have further convoluted the actual ownership and possession of the documents…[…]

Even assuming arguendo that MERS possessed the note and the mortgage,over a year later on March 11, 2011, MERS assigns the mortgage to ASB without the note it purported to possess. There is nothing in any of the files or court cases to suggest or support that MERS assigned the note.  For the foregoing reasons as stated above, there is material fact that the March 11, 2011 assignment of mortgage is a nullity.  HRS §490:3-203(d).”

The bankruptcy judge clearly did not want to swim in the shark infested waters of lenders and MERS.  Sacrifice may come at a price for the lender and MERS to escape a federal lawsuit that is moving quickly.  Since only one of the homeowners is in bankruptcy and the other is not related by blood or marriage the Trustee’s path is a little more complicated and as of today, the bank has not agreed to a deal.

It is a brilliant move.  Bravo.

Should the Trustee prevail in pursuit of his theory, the lender would be reduced to an unsecured creditor and the property could be sold, exemptions paid to the homeowners and distributions paid to the creditors after the Trustee and his attorney collect their fees.  Cha Ching!

UPDATE: The bank settled and the bankruptcy trustee carved out $100,000 deal to the benefit of the estate. Had the homeowners not pursued the issue – MERS would have likely gotten away with this Scott-free.  Luckily, the trustee’s attorney grasped the complex MERS blur after working with one of the homeowners to understand the issues.