The Banks Still Want a Waiver

HOW should banks atone for those foreclosure abuses — all the robo-signing and shoddy recordkeeping that jettisoned so many people from their homes?

It has been four months since a deal to remedy this mess was floated. Not much has happened since — at least not publicly.

Last week, banking executives and state attorneys general met in Washington to try to settle their differences. At issue was how much banks should pay, and how and to whom, to make this all go away. The initial terms, which emerged in March, were said to carry a $20 billion price tag.

Mortgage Electronic Registration Systems, Inc. (aka MERS) is at the center of the Wall Street securitization Ponzi scheme that collapsed the American (and other countries) economy.  A jury would be hard pressed to not determine that the scheme was a premeditated, well contrived plan to evade taxes and defraud homeowners and investors. That’s why there are lots of settlements in investor lawsuits that never make it to trial.  It’s also why banksters are begging the Attorneys General to make a deal.  The banks really don’t want to go to trial and expose their fraud and risk paying triple and punitive damages awarded by juries.

MERS is the Eddie Haskell (Leave it to Beaver) of the crooked plot.  Like Eddie, MERS is an insincere, shallow shell although in front of authority it would curry favor by being an unctuous sycophant. Behind the Haskell facade was a conniving, evil lying character that that you just knew one day would go to prison.

MERS is in bed with Fannie, Freddie, FHLB and 4000 other banks and banking related “members” publicly claiming it wanted 100% (monopoly) of the mortgage recordation market

that would be “good” for America – trying to become “too big to take down“. Monopolies are outlawed in America and in the case of MERS it certainly should be.

The lost revenue for the states, the loss of original documents for the homeowners and investors, the failure to secure the promissory notes and mortgages inside the “Trusts” which led to the forgery to cover it all up – is criminal. No wonder MERS is at the center of the settlement discord with the 50 State AG investigation.

Why let the banks off the hook?  Certainly, MERS is at the core – but they were all “members” of the cartel.  They all knew the scheme – if there is MERS in a mortgage, and apparently there are 67 million of them, there is a problematic cloud on the title… there is likely fraud, forgery and lost original documents attached.

YOUR MORTGAGE LOAN DOCUMENTS MAY BE MISSING ALTOGETHER

You don’t have to be in foreclosure to have been affected.  If you think your original signed mortgage documents are safe in some vault as the MERS plan purported they would be – think again.  As reported in 2007 on Houston, TX Channel 2 KPRC:

The MERS scheme allowed lenders (banks) to write more loans than regulators would legally allow them to hold. A paragraph in the mortgage made MERS the “mortgagee” – not the lender and without disclosure to the borrower. The original lenders were paid when they sold the loans up the ladder that ultimately ended up on Wall Street.

No laws were passed to allow a lender to bifurcate its ownership of the mortgage and promissory note and no disclosure or explanation of the split was given to the borrower. The attitude of the too big to fail crowd was to bulldoze the governments, homeowners and the investors.  Reminiscent of Eddie Haskell, “its better to ask for forgiveness than for permission.”

Visualize a banker sitting at this desk.  On the left of the lender’s desk was a box marked MERS and on the right was a box marked WALL STREET.  As the mortgage loan documents were signed the lender would throw the mortgage in the MERS box and the promissory note in the WALL STREET box – and his desk was clear.  Nothing for the regulators to review. And when it came time for foreclosure, MERS would foreclose instead of the lender… MERS who had no beneficial interest in the loan. This was the “unregulated” derivatives game.

There is some doubt if lenders even knew how many loans they wrote. But now, with investors clambering to get their money back from these bad securities, the boxes are 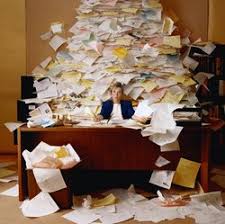 being dumped on top of the lender’s desk and the regulators are lingering at the door while the lender rushes to foreclose and repay Wall Street who has no money to repay investors. Where did the $13 Trillion+ in TARP, Fed and insurance funds go?
Good question.

In many cases, lenders do not have all the documents they need to legally foreclose so they lie to the courts and forge what they need, which was going along quite fine until homeowners got wise.

Robo-signing was a big tip-off that led to uncovering other unlawful practices and eventually to MERS (more recently) stopping foreclosing in the name of MERS as published in their MERS Bulletin of July 22, 2011: “Effective July 22, 2011: No foreclosure proceeding may be initiated, and no Proof of Claim or Motion for Relief from Stay (Legal Proceedings) in a bankruptcy may be filed, in the name of Mortgage Electronic Registration Systems, Inc. (MERS)”

This doesn’t clean up the mess they already created, nor does it pay back the lost tax and filing fee revenue or determine for homeowners that their original documents are safe.  It merely stops MERS from manipulating the regulated system in the future.

The states’ Attorneys General need to seriously consider the criminal nature of this scheme.  MERS charged $6.95 per transaction X 67 million mortgages = $465,650,000 just initially… there were numerous other transactions never recorded in state recordation offices along with licensing and computer software fees paid by the bank members. Where did all that money go?  With only 50 employees that’s nearly $28 million a piece – great job, yeah?

Bottom-line:  America and its respective states need a full accounting.  Where did all the money go – including, but not limited to MERS and the $13 Trillion infusion?  How can you even consider a settlement without providing a full accounting and the answers? Settlements without full exposure just perpetuates the moral hazard.