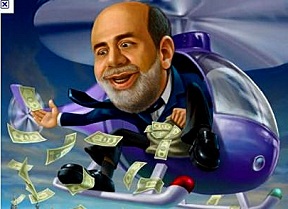 Gee ya think, Ben? Now that the statute of limitations is up, everybody wants to talk tough against Wall Street!

First, tomorrow Ben Bernanke will be on CNBC’s Squawk Box to promote his book, the same CNBC which from a credible financial channel has metamorphosed into an outlet whose only purpose is to cheerlead the stock market and get as many people invested in the next and final Ponzi as possible. He will also discuss the disastrous state of the post-post-bubble economy and the latest plunge in payrolls.

Second, today as part of the same book promotion tour (supposedly because nobody wants to pay Bernanke $250,000 to listen to an hour of bullshit now that the Fed no longer has credibility) he had this exchange with the USA Today’s Susan Page:

Q. Should somebody have gone to jail.

Bernanke: Yeah, yeah I think so. I have objected for…