THE IRAQ WAR WAS A LIE- LISTEN TO BUSH INSIDERS….DESCRIBE WAR CRIMES

MSNBC host Rachel Maddow reports on how the Bush administration viewed the terrorist attacks of 9/11 as an opportunity to remove Saddam Hussein from power in part one of Hubris.   You can read more about the Bush administration’s marketing of a war they had already decided to wage; take a look at Rumsfeld’s secret documents; and read an interview with the co-author of “Hubris”: he talks about torture, secrets, and what we still don’t know. Read more…  Thank you Matt for posting and tweeting this video.

See also Matt Weidner post:
AMERICA, FORECLOSING ON ITSELF AND WAGING WAR AROUND THE WORLD, MURDERING INNOCENTS (AND NO HELP OR FORECLOSURE ASSISTANCE)

But the news does not stop there – North Korea allegedly preparing for it’s fourth nuke test as it appears that the United States’ Pentagon stirred up the rats’ nest with their war games.

THE PAST BECOMES THE PRESENT – A ‘WAG THE DOG’ WITH THE POTENTIAL FOR A NUCLEAR NIGHTMARE?

As tensions heat up with North Korea and move public concern away from the economy and the banksters’ financial force majeure …RT News reports:

“US wish for preemptive action ‘a prelude to global warfare’

However, many believe that the real threat of the escalation of hostilities in the region – and consequently, the world – comes not from North Korea, but from the United States itself. The opinion is shared by Michel Chossudovsky, director of the Center for Research and Globalization and professor of economics at the University of Ottawa. In a conversation with RT, he said the following: 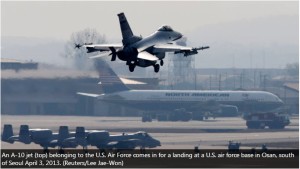 “Just a few weeks ago it was revealed that the Pentagon had implemented a so-called playbook, which was to ratchet up tensions with North Korea. During the war games it has dispatched [nuclear capable planes]… We have to put it in historical perspective, because these threats have been ongoing for more than half a century, since the end of the Korean War.”

Chossudovsky also added that it does not seem at all that the world is serious in its intentions at curbing nuclear threats as such: “Looking at US nuclear doctrine, we have a $$ US32 Billion refurbishing of nuclear weapons, which is barely acknowledged by the mainstream media! We have a $$ US10 Billion refurbishing of tactical nuclear weapons, which can be launched from a B-2 bomber, which have currently been deployed. And then we have a Senate decision which says that nuclear weapons are harmless to the surrounding civilian population and can be used in the conventional war theater.” CLICK HERE FOR THE RT NEWS VIDEO.

When asked what tactics could possibly be implemented to avert the current crisis, Chossudovsky said that he sees a way out if “the people across the land, in Western countries, come to realize that the United States and NATO are a threat to global security, and if they wish to wage a preemptive nuclear war on any country in the world, that is a prelude to global warfare.”

North Korea orders rockets on standby to hit US bases

1 thought on “THE PAST BECOMES THE PRESENT – A ‘WAG THE DOG’ WITH THE POTENTIAL FOR A NUCLEAR NIGHTMARE?”