February 10, 2022: Questions: Is the rush to vax to beat out the new COVID tests or the domino fall of the pension funds worldwide? Whose fault are the shortfalls aka pension deficits aka losses aka zero (0) funds? Now ask the title question.

“The pension industries in many countries are in a bad way. According to a Citibank report from 2016, the 20 largest OECD countries alone have a US $78 TRILLION shortfall in funding pay-as-you-go and defined benefit public pensions’ obligations. This shortfall is far from trivial. It is equivalent to about 1.8 times the value of these countries’ collective national debt.” CLICK HERE 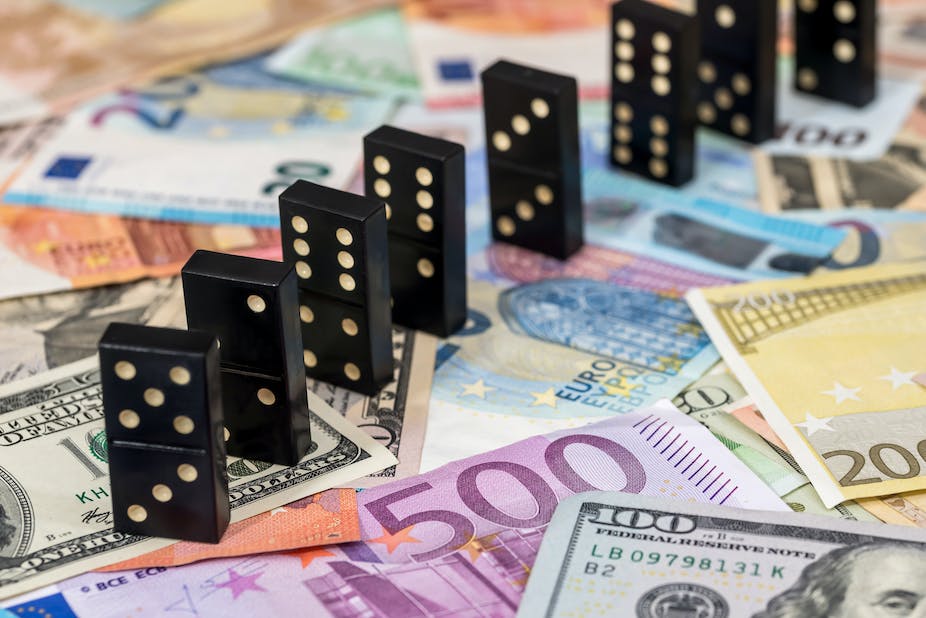 While everyone from Tony Blair to Nouriel Roubini is debating whether or not bankers should be hanged, the Wall Street Journal and Bloomberg provide some fascinating historical context.

Dark subjects: A Red Saunders creation. This picture is called Wat Tyler and the Peasant’s Revolt, 1381.

In 2008, American homeowners would have been satisfied with a decent modification. Four years later, after the modification scams, flim-flam run-arounds, fraudulent assignments, purposely inflated mortgages, lost jobs, lost pension and retirement funds, Libor scandals proving that mortgages were defective loan products, loss of privacy information that, like Humpty Dumpty, will never be recovered – homeowners want their loans declared void, the banksters and their complicit employees to go to jail.

Around the world there is a great debate asking ‘where are the indictments’ and ‘what is an appropriate sentence’ for the financial devastation that was caused by the Wall Street banksters and their pals in other countries. Iran wasted no time in sentencing 4 bankers to death by hanging for just a billion-dollar bank fraud. Think what they’d do to Jamie Dimon, Ken Lewis, Sandy Weill, Bernanke, Paulson, Geithner, Rubin, Corzine, and Blankfein etc. for their “TRILLION$” in deceptive business practices, fraud, money laundering and Libor scandals!

DUBAI, July 30 (Reuters), reports The Daily Bail – “An Iranian court has sentenced four people to death for a billion-dollar bankfraud that tainted the government of President Mahmoud Ahmadinejad, state media reported on Monday.

Iranians, hit by sanctions and soaring inflation, were shocked by the scale of the $2.6 billion bank loan embezzlement that was exposed last year and by allegations it was carried out by people close to the political elite or with their assent.

Of the thirty-nine people tried for the fraud – the biggest in the Islamic Republic’s history – four were sentenced to hang, the IRNA state news agency reported.

“According to the sentence that was issued, four of the defendants in this case were sentenced to death,” prosecutor general Gholam-Hossein Mohseni-Ejei told IRNA.

Two people were sentenced to life and others received jail sentences of up to 25 years, Mohseni-Ejei said. In addition to jail time, some were sentenced to flogging, ordered to pay fines and banned from government jobs.”  Continue reading…

Iran is not the only country that takes financial crimes seriously.  According to China’s criminal law, someone convicted of financial fraud involving a large sum can face capital punishment.

From Wiki:  China has executed bankers for fraudulent activity:

Is there any doubt why Sandy Weill wanted to be the first to suggest it’s time to break up the “too big to fail” banks?  Guilty Dogs Always Bark First…

It’s just surprising that more politicians didn’t jump on his bandwagon when they had the chance. Silence is golden (they think). International traveling for Wall Street bankers is probably not advisable these days.

Financial criminals throughout history have been beaten, tortured and even put to death, with little evidence that severe punishments have consistently deterred people from misconduct that could make them rich.

The history of drastic punishment for financial crimes may be nearly as old as wealth itself.

The Code of Hammurabi, more than 3,700 years ago, stipulated that any Mesopotamian who violated the terms of a financial contract – including the futures contracts that were commonly used in commodities trading in Babylon – “shall be put to death as a thief.” The severe penalty doesn’t seem to have eradicated such cheating, however.

In medieval Catalonia, a banker who went bust wasn’t merely humiliated by town criers who declaimed his failure in public squares throughout the land; he had to live on nothing but bread and water until he paid off his depositors in full. If, after a year, he was unable to repay, he would be executed – as in the case of banker Francesch Castello, who was beheaded in 1360.

Bankers who lied about their books could also be subject to the death penalty.

In Florence during the Renaissance, the Arte del Cambio – the guild of mercantile money-changers who facilitated the city’s international trade – made the the cheating of clients punishable by torture. Rule 70 of the guild’s statutes stipulated that any member caught in unethical conduct could be disciplined on the rack “or other corrective instruments” at the headquarters of the guild.

But financial crimes weren’t merely punished; they were stigmatized. Dante’s Inferno is

populated largely with financial sinners, each category with its own distinctive punishment: misers who roll giant weights pointlessly back and forth with their chests, thieves festooned with snakes and lizards, usurers draped with purses they can’t reach, even forecasters whose heads are wrenched around backward to symbolize their inability to see what is in front of them.

Counterfeiting and forgery, as the historian Marvin Becker noted in 1976, “were much less prevalent in Florence during the second half of the fourteenth century than in Tuscany during the twentieth century” and “the bankruptcy rate stood at approximately one-half [the modern rate].”

In England, counterfeiting was punishable by death starting in the 14th century, and altering the coinage was declared a form of high treason by 1562.

In the 17th century, the British state cracked down ferociously on counterfeiters and “coin-clippers” (who snipped shards of metal off coins, yielding scraps they could later melt down or resell). The offenders were thrown into London’s notorious Newgate prison.

The lucky ones, after being dragged on planks through sewage-filled streets, were hanged. Others were smeared with tar from head to toe, tied or shackled to a stake, and then burned to death.

The British government was so determined to stamp out these financial crimes that it put Sir Isaac Newton on the case. Appointed as warden of the Royal Mint in 1696, Newton promptly began uncovering those who violated the financial laws of the nation with the same passion he brought to discovering the physical laws of the universe.

The great scientist was tireless and merciless. Newton went undercover, donning disguises to prowl through prisons, taverns and other dens of iniquity in search of financial fraud. He had suspects brought to the Mint, often by force, and interrogated them himself. In a year and a half, says historian Carl Wennerlind, Newton grilled 200 suspects, “employing means that sometimes bordered on torture.”

When one counterfeiter begged Newton to save him from the gallows – “O dear Sir no body can save me but you O God my God I shall be murdered unless you save me O I hope God will move your heart with mercy and pity to do this thing for me” – Newton coldly refused.

Until at least the early 19th century, it remained commonplace for counterfeiters and forgers to be put to death; between 1792 and 1829, for example, notes Wennerlind, 618 people were convicted of counterfeiting British paper currency, and most of them were hanged. Many were women.

During the “Good Parliament” of 1376, public discontent over [manipulation of currency exchange rates similar to the current Libor scandal] came to a head. The Commons, represented by the speaker, Peter de la Mare, accused leading members of the royal court of abusing their position to profit from public funds.

A particular target was the London financier Richard Lyons ….

Initially the government bowed to public pressure. Lyons was imprisoned in the Tower of

London and his properties and wealth were confiscated. Other leading courtiers implicated in these abuses, such as Latimer and the king’s mistress, Alice Perrers, were banished from court.

Once parliament had dissolved and the public outcry had died down, however, the king’s eldest son, John of Gaunt, acted to reverse the verdicts of the Good Parliament. Latimer and Perrers soon reappeared at the king’s side and Lyons was released from the Tower and recovered his wealth, while the “whistleblower” de la Mare was thrown in jail. The government also sought to appease the wealthy knights and merchants that dominated parliament by imposing a new, regressive form of taxation, a poll tax paid by everyone rather than a tax levied on goods. This effectively passed the burden of royal finance down to the peasantry.

It seemed as though everything had returned to business as normal and Lyons appeared to have gotten away with it.

In 1381, however, simmering discontent over continuing suspicions of government corruption and the poll tax contributed to a massive popular uprising, the Peasants’ Revolt, during which leading government ministers, including Simon of Sudbury (the chancellor and archbishop of Canterbury) and Robert Hales (the treasurer) were executed by the rebels. This time, Lyons did not escape; he was singled out, dragged from his house and beheaded in the street.

If the King had followed the rule of law – and kept Lyons and the boys in jail – everything would have calmed down. The monarchy – just like the present-day government – chose to ignore the rule of law, and protect the thieves and punish the whistleblowers.

We have argued for years that the best way to avoid violence is to reinstate the rule of law.

misdeeds [like these] will lead to fundamental reforms of the financial sector – such as the separation of retail and investment banking or legislation to regulate the “bonus culture” – or just more cosmetic changes that fail to address the structural issues.

Will we have to wait for a 21st century peasants’ revolt before seeing any real change?

The Daily Bail:  Hang the bankers… ?
“Bernanke, Paulson, Geithner, Rubin, Corzine, Dimon and Blankfein are safe for now, but perhaps if we moved Wall Street to downtown Tehran.

We have an entire class of people and financial corporations who do little more than use their money (via lobbying) and power to extract (e.g., legally steal) billions of dollars from both taxpayers and shareholders, and they are heralded as ‘job creators’ and ‘captains of industry.’  When caught doing something that is actually illegal (Libor manipulation, for example), they blame rogue traders and call upon political connections with Eric Holder and Lanny Breuer via the Covington & Burling infested Department of Justice.

Scoundrels, every last one of them.

Meanwhile, those who steal from grocery stores generally go to jail.

It is not fair.  It is not just.  It is not right.  And it is why, according to a new Gallup Poll, ‘Reducing Corruption in Government’ has become the second most important issue to American voters, with a whopping 87% of all votes.”

All in all – a little interesting history, yeah?

8 thoughts on “RSN: Will the Peasants Go Medieval on Bankers?”