Washington, D.C. is a town that runs on inside information – but should our elected officials be able to use that information to pad their own pockets?

“In January 2008, President George W. Bush was scrambling to bolster the American economy. The subprime mortgage industry was collapsing, and the Dow Jones industrial average had lost more than 2,000 points in less than three months. House Minority Leader John A. Boehner became the Bush

administration’s point person on Capitol Hill to negotiate a $150 billion stimulus package. In the days that followed, Treasury Secretary Henry M. Paulson Jr. made frequent phone calls and visits to Boehner. Neither Paulson nor Boehner would publicly discuss the progress of their negotiations to shore up the nation’s financial portfolio.

On Jan. 23, Boehner (R-Ohio) met Paulson for breakfast. Boehner would later report the rearrangement of a portion of his own financial portfolio made on that same day. He sold between $50,000 and $100,000 from a more aggressive mutual fund and moved money into a safer investment… [read more in the Washington Post].

Boehner is one of 34 members of Congress who took steps to recast their financial portfolios during the financial crisis after phone calls or meetings with Paulson; his successor, Timothy F. Geithner; or Federal Reserve Chairman Ben S. Bernanke, according to a Washington Post examination of appointment calendars and congressional disclosure forms. 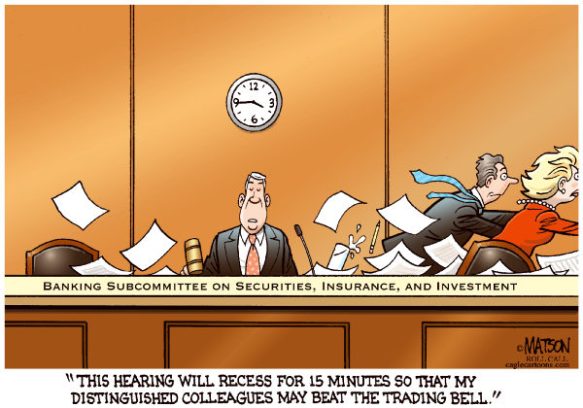 The lawmakers, many of whom held leadership positions and committee chairmanships in the House and Senate, changed portions of their portfolios a total of 166 times within two business days of speaking or meeting with the administration officials. The party affiliation of the lawmakers was about evenly divided between Democrats and Republicans, 19 to 15.

The financial moves by the members of Congress are permitted under congressional ethics rules, but some ethics experts said they should refrain from taking actions in their financial portfolios when they might know more than the public.

“They shouldn’t be making these trades when they know what they are going to do,” said Richard W. Painter, who was chief ethics lawyer for President George W. Bush. “And what they are going to do is then going to influence the market. If this was going on in the private sector or it was going on in the executive branch, I think the SEC would be investigating.”

A shift to Treasury securities

In late 2006, Congress started crafting legislation to overhaul Fannie Mae and Freddie Mac, a major effort to stem a rising tide of defaults on risky loans given to home buyers with poor credit.  As Congress worked to rein in the two government-sponsored lenders, Fannie and Freddie pushed back with aggressive lobbying campaigns, stalling the effort in early 2007.

Hank Paulson started working the Hill, trying to break the deadlock and win support for the revisions. He called and met with a number of members of Congress, including Sen. Ben Nelson (D-Neb.), on this and other reform efforts. 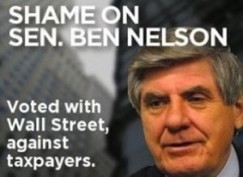 Paulson and Nelson spoke on Jan. 10. The next day, Nelson sold between $250,000 and $500,000 in Lehman Brothers certificates of deposit. (Congressional financial disclosure forms list only approximate ranges.) Nelson also purchased between $100,000 and $200,000 in Treasury notes, a safer investment.  Nelson announced his retirement last year.

Toward the end of the summer of 2007, the foundation of the nation’s real estate market started to shake. On Aug. 6, the American Home Mortgage Investment Corp., the nation’s 10th-largest mortgage firm, filed for bankruptcy.

Three days later, Paulson was headed to work at the Treasury Department when he received word that the U.S. mortgage crisis and tightening credit markets were spreading to Europe, he would later write in his autobiography, “On the Brink: Inside the Race to Stop the Collapse of the Global Financial System.”

On Aug. 9, the Dow fell nearly 400 points, its second-biggest one-day drop in five years. The next day, the Fed issued a statement pledging to “provide reserves as necessary . . . to promote trading in the federal funds market.”

At 4:30 p.m. on Aug. 13, 2007, as the markets closed, Paulson called Sen. Kent Conrad (D-N.D.), chairman of the Budget Committee, according to the Treasury secretary’s appointment calendar.

The next day, Conrad adjusted his family’s portfolio for the first time in four months.

Apparently, that wasn’t all that Conrad took advantage of as noted by a Countrywide loan officer in testimony before the Senate Ethics committee [see here].

Conrad also announced his retirement. “After months of consideration, I have decided not to seek reelection in 2012,” Conrad said in a letter to constituents. “There are serious challenges facing our state and nation, like a $14 trillion debt and America’s dependence on foreign oil.”

They are unlikely to pass any kind of law that controls self-dealing behavior and there is no other way to get it done.  There are always a few of them that are willing to do the right thing but the leadership of each house is most likely to be the stellar examples of those that manipulate the system to their own advantage.  So, if a law comes up, the leadership will stop any forward momentum.  Insider trading appears to be a bi-partisan problem with egregious examples from both sides of the aisle. [Congressional Insider Trading: A case study in Moral Hazard].

While the American public was frantically struggling with the loss of employment, foreclosures and evictions, cushy Legislators (state and federal) were re-arranging their portfolios – including getting new mortgages when their constituents were thrown out of their homes.  Check your local recordation offices and you’ll be amazed at the new mortgages issued to politicians from 2008 – present.  They knew what the public didn’t.

Most former congressmen and senators manage to leave Washington – if they ever leave Washington – with more money in their pockets than they had when they arrived, and as you are about to see, the biggest challenge is often avoiding temptation.  “Members of Congress are still loosey-goosey about what they require of themselves,”

said Painter, who teaches securities law at the University of Minnesota. “I think it’s time for Congress to impose the same rules on themselves that they impose on others. The Stock Act doesn’t do that.”

And if federal legislators are loose – then state lawmakers are likely a mudslide… and let’s not forget about the judiciary.

Look, as long as state Legislators, Congress and the Judiciary make the kind of money and benefits they do, we are asking the well-off (who have lost touch with the average and poor) to deal with the rich. Their salaries and staffing are out of line in this economy and they should not be able to make stock investments while in office or on the bench. Read their disclosure statements– it will make you wrench.

Judges and politicians have access to inside information and should divest their holdings before they enter office. If they want to invest In stocks then let it be government bonds that will perform as long as the government does well. U.S. Treasury securities are a great way to invest and save for the future.
“Today, as a result of the Supreme Court’s refusal to reconsider its decision in Citizens United, we are rapidly moving toward a nation of the super-rich, by the super-rich and for the super-rich. That is not what America is supposed to be about…” [Bernie Sanders commentary and Resolution, here].

And we wonder why the mortgage crisis lingers without substantial assistance.  Could it be that the moral hazard is so great at the legislative and judicial levels that they can only project what they themselves can conceive?