If anyone doubts why the Governors in all 50 states should not allow their Attorneys General to sign the Multi-State Bank Settlement then take the time to listen to Delaware Attorney General Beau Biden in this MSNBC interview with Alex Wagner. CLICK HERE for Interview 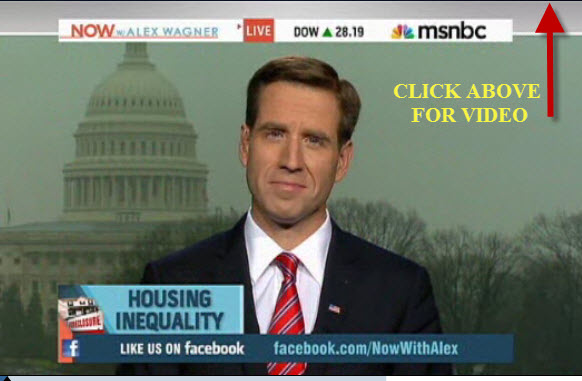 Banks “who engaged in fraudulent behavior should not be granted criminal or civil immunity for potential wrongdoing related to illegal mortgage and foreclosure practices…the Federal Government and State attorneys general should proceed with full investigations into claims of fraudulent behavior by the banks”  CLICK HERE for video. 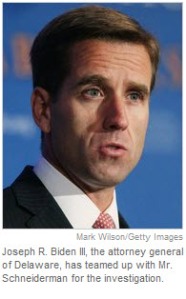 AG BIDEN: “… I know for sure we have further to go on investigations. We’ve done 20 housing workshops across the state of Delaware as my colleagues all across the country are doing. Where you have home owners coming in and telling stories of just awful egregious conduct by many of these servicing banks. Telling stories of a person that is in negotiation with the bank about something short of a foreclosure. In entering into what they believe to be a modification of their note from $1,000, $800. They say if you do that for three months, we’ll make it permanent. And on the 91st day or the 100th day, the bank calls up and says, we’re foreclosuring on you, anyway. These stories I’m trying to articulate are all over our state, all over the country and that’s why you have 50 attorneys general united in investigating the banks. You know somebody is doing something wrong when all 50 AGs are seeing something wrong.

… what they’re articulating is just incredible frustration. And that is the frustration really 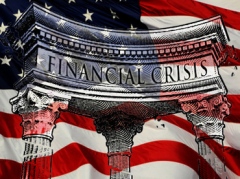 $16 trillion in wealth vanished. It just didn’t vanish because it was a cyclical downturn in the economy. It vanished because what of happened to the economy. What happened to the economy was a manmade disaster, not a natural disaster. Whether you’re in the tea party or a 99%er or anywhere in between, which is most of America, in between, you’re mad as heck because there’s been no accountability. $16 trillion flushed down the toilet on something happening in the economy that men and women and entities caused and no one has been held accountable in any way shape or form. More people went to jail in the savings and loan crisis. Over 1,000 for something that was, was minor compared to what we experience over the last three years in our economy.”

BIDEN CONTINUES: “…When you’re about to lose your home, it’s like losing a child and it is the most, it is an incredibly, incredibly painful thing to have to endure, to wake up and to have to fight against. There are people who are going to be foreclosed upon because they’re unable to pay their bills. That’s appropriate in many cases. But the problem here is that the servicing arms of these banks are foreclosuring at such a rapid rate because it is,

they are incentivized to foreclosure. They are not incentivized to have a discussion about something short of foreclosure. The big issue here is that the banks make it almost impossible for the borrower to get them on the phone, to have a meaningful discussion in good faith about something sort of foreclosure. a short sale, mortgage modification. Lower the interest rate, you can make the bank whole and you can make the borrower whole, but keep them in the house.
… I challenge anyone listening to find out who actually owns their mortgage and have a meaningful discussion about whether or not there can be some modification of the mortgage. By the way, you should try to do this before you’re in trouble. Because when you do it when you’re in trouble, then the clock is ticking against you.”

The banks wrote more loans than they can hold. There are not enough lifeboats for everyone and the ship is sinking. Realistically, Washington, DC cannot come up with an easy answer. They’ve already stated they don’t know what to do. The majority of America is “Against Wall Street Immunity”.

Unless the federal government wants to create a new housing agency or smart state legislators decide to take over the mortgages in their states and reconstruct the loans with the borrowers – the banks must continue to foreclose because they cannot hold all the mortgage they wrote.

Hundreds of mortgage lenders made a planned exit during and after this fiasco. They’ve bankrupted, gone out of business, dissolved – but the majority of loan originators have disappeared. Those smaller banks and credit unions that wrote loans and sold them to Wall Street through funding warehouses can’t take them over because they don’t have enough depositor leverage (9:1 ratio) to hold the liabilities. Certainly Wall Street banks can’t maintain them legally because as it is they are using the vacant REO properties to prop up their asset sheets.  Make it a “mortgage” – it becomes a liability and they are barely keeping afloat as it is.

weeding out those banks and trusts that have no standing because the assignment of mortgage documents were fraudulent manufactured and failed to be timely and properly assigned to the trusts and dismiss the foreclosure and eviction actions with prejudice.

While that may give the homeowner a home free and clear it doesn’t create a “moral hazard” relating to the homeowners – they didn’t collapse the economy – THE BANKS DID…that’s why the “good” AGs are investigating. Just remember your honor, it’s the banks that committed the fraud and collapsed the economy and they don’t have enough money to make every one whole. Compare that $20 Billion they are offering to the $16 Trillion they scammed – it’s a pittance. Think about it.

And just because you eliminate the mortgage doesn’t mean that there won’t be one in the future for repairs, additions, sales, etc.  Hopefully, by the next round of mortgage lending and investing there will be a Congress in place that will regulate this looney toon business and borrowers won’t too soon forget how they were targeted and taken advantage of by unscrupulous bankers – a repeat of the 1930s that our grandfathers warned our parents about and we thought could never happen – well, it did.

Well, Judges – guess it’s up to you.  You can continue to irresponsibly throw people out of their homes when you know what fraud looks like and you are seeing it in nearly every mortgage foreclosure case in your court.  You can’t save your pension, but you can save our economy.

Dismiss the banks – WITH PREJUDICE.  And let’s put our country back together.

As always, please pass this blog along to your friends and family.  Knowledge is powerful.