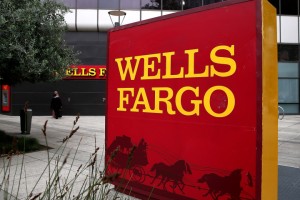 Drain shredded Wells Fargo’s arguments regarding two crucial documents needed to prove ownership of a loan: an indorsement (another term for endorsement) on a note and an assignment of mortgage.

These documents have to be created properly within a certain time frame, or they won’t hold up in court.

The issue lies at the heart of the foreclosure crisis, and continues to haunt hardworking New Yorkers like Franklin, a speech pathologist for autistic children, to this day. 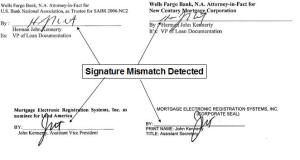 “… [T]he blank indorsement, upon which Wells Fargo is relying, was forged,” wrote Drain in a stinging rebuke to the bank. “Nevertheless it does show a general willingness and practice on Wells Fargo’s part to create documentary evidence, after-the-fact, when enforcing its claims, WHICH IS EXTRAORDINARY,” wrote Judge Drain with emphasis.

Drain went on to say that “it is conceivable that all of Wells Fargo’s newly created mortgage assignments and newly created indorsements were proper” but that the burden was on Wells to show that, and it didn’t.

A Wells Fargo spokesman said, “Wells Fargo’s processes ensure that all note endorsements are done legally and appropriately, and we strongly dispute the conclusions in this case,” adding, “we are troubled by the additional comments about our general practices that are unsupported by the evidence.”

The judge’s ruling delves deeply into the work of Herman John Kennerty, who was deposed for this case by Franklin’s attorney, Linda Tirelli.

Drain casts a harsh eye on Kennerty’s statements about his work as a manager heading up a “default documents” department for Wells Fargo at the time of Franklin’s foreclosure. 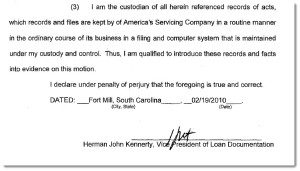 Kennerty admitted to signing between 50 and 150 original documents each day related to administration and enforcement of Wells’ defaulted loans, according to the ruling.

Drain added: “Moreover, Mr. Kennerty’s testimony does not stop at describing manufactured mortgage assignments. He also testified that his ‘assignment team’s’ duties were not limited to processing assignments, including, when determined necessary, creating them; in addition, the ‘assignment team’ included people tasked with endorsing notes.”

Franklin told The Post, “I feel relieved … I’m hoping this case will help other people.”

“Unfortunately, in Hawaii and many other states, the judges aren’t willing to protect the integrity of their courts – even with tons of forgery robo-signed documents before them and blatant fraud on the court – they rule for their buddy banks. Forgery and those that bring it into the court are delusional that they are asking for justice. Judges that ignore forgery, and statutes like Hawaii and New York’s Attorney Affirmation which give them the power to eliminate forged paperwork, ought to have their heads examined – a full psych examination. And after that – an examination of their emails and finances to make sure there was no collusion. With all of the Billion$$$ in bank settlements for acts of fraud, forgery, robo-signing and misrepresentation – any judge that doesn’t kick the bank out of the court when it brings in even the essence of forgery – ought to be examined under a microscope. Either sit on the bench in truth and grace – or get out of the judiciary.”
–Sydney Sullivan 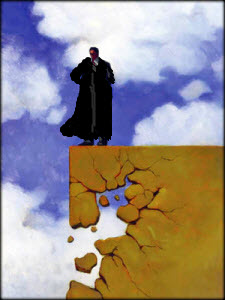 These are strong words – but they are necessary in order for legislators to begin to monitor the judicial process and how their work in creating law is being abused. There is a reason why our country was built on “one nation under God.”

11 For this reason God sends them a powerful delusion so that they will believe the lie 12 and so that all will be condemned who have not believed the truth but have delighted in wickedness.

Wake up and realize the need to protect the foundation of truth and grace, otherwise, with a weaken justice system at the state level, we’ll all be going to the dogs.