One of the best week-in-review posts! 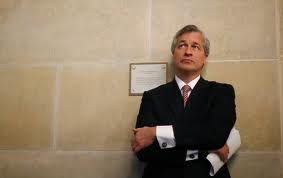 After JPMorgan Chase’s $13 billion mortgage settlement emerged this week, Jamie Dimon held a conference call with analysts. “It could’ve been somebody else,” the bank’s chief executive said. Who is next on the list?

In a news analysis in The New York Times, Peter Eavis wrote that “there were plenty of other big subprime players — Countrywide Financial, Merrill Lynch and even foreign institutions like Deutsche Bank and Royal Bank of Scotland among them.”

And federal prosecutors don’t have to make a decision right away. By using the Financial Institutions Reform, Recovery and Enforcement Act of 1989, or Firrea, the Justice Department can take advantage of a 10-year statute of limitations. President Obama will be out of office before a future attorney general will face that deadline.

A look back on our reporting of the past week’s highs and lows in finance.

Scrutiny Over Disparity in Loan Fees at Auto Dealerships | Consumer advocates and regulators are concerned that the ability of dealers to decide how much to charge for arranging a loan has led to discrimination.
DealBook »   [Think maybe they can get a job at Chase now? DC Ed.]

Service Members Left Vulnerable to Payday Loans | The Military Lending Act, the authorities say, has not kept pace with high-interest lenders that focus on servicemen and women, both online and near bases. DealBook »

News Analysis: Cost Aside, JPMorgan May Have A Good Deal | The $13 billion figure reached with the Justice Department may represent political theater as much as a real attempt to right wrongs. DealBook »

SAC Trader Had ‘Secret Pipeline’ of Information, Prosecutors Say | Unlike the hard-charging billionaires who rule Wall Street’s top hedge funds, Michael S. Steinberg was a history and philosophy major who started at SAC as a low-level clerk, his lawyer said. DealBook »

The Trade: In Pick to Lead a Financial Regulator, an Enigma | Timothy G. Massad has been nominated to the Commodity Futures Trading Commission, but little is known about his views on regulation of derivatives, writes Jesse Eisinger.DealBook »

In Extracting Deal From JPMorgan, U.S. Aimed for Bottom Line | The case against JPMorgan may set a precedent for cases against other major banks and industries like health care, where fines have been growing. DealBook »

JPMorgan Reveals How It Formed Mortgages | After months of wrangling, the bank agreed to a statement of facts with the government that provides new details into how it assembled mortgage securities sold from 2005 through 2008. DealBook »

In Trial of a Trader, One Insider Stands Out | In a long chain of inside information, one link stands out. DealBook »

A Municipal Bankruptcy May Create A Template | Jefferson County, Ala., is asking a federal court to approve its plan for exiting bankruptcy, including court oversight for a period of 40 years. DealBook »

Regulators See Value in Bitcoin, and Investors Hasten to Agree | The virtual currency took a big step toward the mainstream as federal officials signaled a willingness to accept it as a legitimate payment alternative. DealBook »

New Market Benchmarks Show a Lack of Options | Stocks might entice investors who have been late to the party to enter it now, even if prices are no longer as cheap as they were a few years ago. DealBook »

John Edwards Revisits His Past, Hanging Out a Law Shingle Again | The former senator and vice presidential candidate, whose political career collapsed in a sex scandal and a fraud trial, is back as a trial lawyer and opening a new law practice.DealBook »

DealBook Column: A Conflict In Geithner’s New Job? Not Exactly There’s something quite odd about the developing narrative about Timothy F. Geithner’s move, because it is hard to argue Mr. Geithner ever spun through the revolving door even once, writes Andrew Ross Sorkin. | DealBook »

Broader Pool of Madoff Fraud Victims Eligible to Seek Compensation From Fund | So-called indirect investors, representing about 70 percent of all the claims filed, are eligible for compensation from a $2.35 billion fund collected by the Justice Department. DealBook »

Dropbox Is Said to Seek $250 Million in Funding, Doubling Its Valuation | Online storage, once a backwater of the Silicon Valley technology scene, is suddenly a hot commodity.DealBook »

JPMorgan Settlement Nearly Ready | The bank will have to hire an independent monitor to oversee the distribution of the $4 billion in relief directed to struggling homeowners. DealBook »

Pressure Builds to Finish Volcker Rule on Wall St. Oversight | Treasury Secretary Jacob J. Lew has strongly urged federal agencies to finish writing by the end of the year the so-called Volcker Rule, a regulation that would strike at the heart of Wall Street’s risk-taking. DealBook »

Geithner to Join Private Equity Firm | Timothy F. Geithner will join Warburg Pincus as president. It would be his first prominent position since leaving office as Treasury secretary this year. DealBook »

Lawyers In Love | Why is John Edwards opening a new law practice? “The mating calls of lawyers in love,” sings Jackson Browne. YouTube »

My Attorney Bernie | Will John Edwards ever have a client as devoted as Blossom Derrie? YouTube »  LOL!

2 thoughts on “Weekend Reading: Banks Worried They Might Be Next”