Remember: “First come, first served”
Like the Billionaires dumping stocks – get it out of the banks now and invest in something tangible. Plant a garden, put solar on your roof – you may not want to leave those 401ks and mutual funds just sitting there because they may not be there when you need them most. [Ed. DeadlyClear] 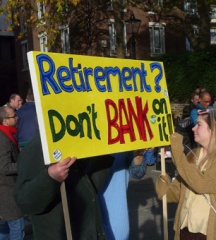 If these worries become really serious, . . . [s]mall savers will take their money out of banks and resort to household safes and a shotgun. – Martin Hutchinson on the attempted EU raid on deposits in Cyprus banks (Photo: Loz Pycock / Flickr)

[Click on the Blue links for research and details.]

The deposit confiscation scheme has long been in the making.  US depositors could be next . . . .

On Tuesday, March 19, the national legislature of Cyprus overwhelmingly rejected a proposed levy on bank deposits as a condition for a European bailout. Reuters called it “a stunning setback for the 17-nation currency bloc,” but it was a stunning victory for democracy. As Reuters quoted one 65-year-old pensioner, “The voice of the people was heard.”

The EU had warned that it would withhold €10 billion in bailout loans, and the European Central Bank (ECB) had threatened to end emergency lending assistance for distressed Cypriot banks, unless depositors – including small savers – shared the cost of the rescue. In the deal rejected by the legislature, a one-time levy on depositors would be required in return for a bailout of the banking system. Deposits below €100,000 would be subject to a 6.75% levy or “haircut”, while those over €100,000 would have been subject to a 9.99% “fine.”

The move was bold, but the battle isn’t over yet.  The EU has now given Cyprus until Monday to raise the billions of euros it needs to clinch an international bailout or face the threatened collapse of its financial system and likely exit from the euro currency zone.

The deal pushed by the “troika” – the EU, ECB and IMF – has been characterized as a one-off event devised as an emergency measure in this one extreme case. But the confiscation plan has long been in the making, and it isn’t limited to Cyprus. 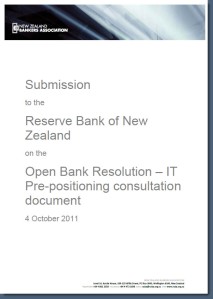 In a September 2011 article in the Bulletin of the Reserve Bank of New Zealand titled “A Primer on Open Bank Resolution,” Kevin Hoskin and Ian Woolford discussed a very similar haircut plan that had been in the works, they said, since the 1997 Asian financial crisis.  The article referenced recommendations made in 2010 and 2011 by the Basel Committee of the Bank for International Settlements, the “central bankers’ central bank” in Switzerland.

The purpose of the plan, called the Open Bank Resolution (OBR) , is to deal with bank failures when they have become so expensive that governments are no longer willing to bail out the lenders. The authors wrote that the primary objectives of OBR are to:

The spectrum of “creditors” is defined to include depositors:

Most people would be surprised to learn that they are legally considered “creditors” of their banks rather than customers who have trusted the bank with their money for safekeeping, but that seems to be the case. According to Wikipedia:

In most legal systems, . . . the funds deposited are no longer the property of the customer. The funds become the property of the bank, and the customer in turn receives an asset called a deposit account (a checking or savings account). That deposit account is a liability of the bank on the bank’s books and on its balance sheet.  Because the bank is authorized by law to make loans up to a multiple of its reserves, the bank’s reserves on hand to satisfy payment of deposit liabilities amounts to only a fraction of the total which the bank is obligated to pay in satisfaction of its demand deposits.

The bank gets the money. The depositor becomes only a creditor with an IOU. The bank is not required to keep the deposits available for withdrawal but can lend them out, keeping only a “fraction” on reserve, following accepted fractional reserve banking principles. When too many creditors come for their money at once, the result can be a run on the banks and bank failure.

The New Zealand OBR said the creditors had all enjoyed a return on their investments and had freely accepted the risk, but most people would be surprised to learn that too. What return do you get from a bank on a deposit account these days? And isn’t your deposit protected against risk by FDIC deposit insurance?

Not anymore, apparently. As Martin Hutchinson observed in Money Morning, “if governments can just seize deposits by means of a ‘tax’ then deposit insurance is worth absolutely zippo.”

The Real Profiteers Get Off Scot-Free

Felix Salmon wrote in Reuters of the Cyprus confiscation:

Meanwhile, people who deserve to lose money here, won’t. If you lent money to Cyprus’s banks by buying their debt rather than by depositing money, you will suffer no losses at all. And if you lent money to the insolvent Cypriot government, then you too will be paid off at 100 cents on the euro. . . .

The big winner here is the ECB, which has extended a lot of credit to dubiously-solvent Cypriot banks and which is taking no losses at all.

It is the ECB that can most afford to take the hit, because it has the power to print euros. It could simply create the money to bail out the Cyprus banks and take no loss at all. But imposing austerity on the people is apparently part of the plan.  Salmon writes:

From a drily technocratic perspective, this move can be seen as simply being part of a standard Euro-austerity program: the EU wants tax hikes and spending cuts, and this is a kind of tax . . . .

The big losers are working-class Cypriots, whose elected government has proved powerless . . . . The Eurozone has always had a democratic deficit: monetary union was imposed by the elite on unthankful and unwilling citizens. Now the citizens are revolting: just look at Beppe Grillo.

But that was before the Cyprus government stood up for the depositors and refused to go along with the plan, in what will be a stunning victory for democracy if they can hold their ground.

It CAN Happen Here
[Click on the Blue links for research and details.]

Cyprus is a small island, of little apparent significance. But one day, the bold move of its legislators may be compared to the Battle of Marathon, the pivotal moment in European history when their Greek forebears fended off the Persians, allowing classical Greek civilization to flourish.  The current battle on this tiny island has taken on global significance.  If the technocrat bankers can push through their confiscation scheme there, precedent will be established for doing it elsewhere when bank bailouts become prohibitive for governments.

That situation could be looming even now in the United States.  As Gretchen Morgenson warned in a recent article on the 307-page Senate report detailing last year’s $6.2 billion trading fiasco at JPMorganChase: “Be afraid.”  The report resoundingly disproves the premise that the Dodd-Frank legislation has made our system safe from the reckless banking activities that brought the economy to its knees in 2008. Writes Morgenson:

JPMorgan . . . Is the largest derivatives dealer in the world. Trillions of dollars in such instruments sit on its and other big banks’ balance sheets. The ease with which the bank hid losses and fiddled with valuations should be a major concern to investors.

Pam Martens observed in a March 18th article that JPMorgan was gambling in the stock market with depositor funds. She writes, “trading stocks with customers’ savings deposits – that truly has the ring of the excesses of 1929 . . . .”

The large institutional banks not only could fail; they are likely to fail.  When the derivative scheme collapses and the US government refuses a bailout, JPMorgan could be giving its depositors’ accounts sizable “haircuts” along guidelines established by the BIS and Reserve Bank of New Zealand.

Time for Some Public Sector Banks?

The bold moves of the Cypriots and such firebrand political activists as Italy’s Grillo are not the only bulwarks against bankster confiscation. While the credit crisis is strangling the Western banking system, the BRIC countries – Brazil, Russia, India and China – have sailed through largely unscathed. According to a May 2010 article in The Economist, what has allowed them to escape are their strong and stable publicly-owned banks. 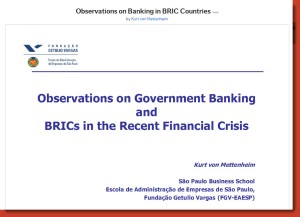 Russia is an Eastern European country that weathered the credit crisis although being very close to the Eurozone. According to a March 2010 article in Forbes:

As in other countries, the [2008] crisis prompted the state to take on a greater role in the banking system.  State-owned systemic banks . . . have been used to carry out anti-crisis measures, such as driving growth in lending (however limited) and supporting private institutions.

In the 1998 Asian crisis, many Russians who had put all their savings in private banks lost everything; and the credit crisis of 2008 has reinforced their distrust of private banks.  Russian businesses as well as individuals have turned to their government-owned banks as the more trustworthy alternative. As a result, state-owned banks are expected to continue dominating the Russian banking industry for the foreseeable future.

The entire Eurozone conundrum is unnecessary. It is the result of too little money in a system in which the money supply is fixed, and the Eurozone governments and their central banks cannot issue their own currencies. There are insufficient euros to pay principal plus interest in a pyramid scheme in which only the principal is injected by the banks that create money as “bank credit” on their books. A central bank with the power to issue money could remedy that systemic flaw, by injecting the liquidity needed to jumpstart the economy and turn back the tide of austerity choking the people.

The push to confiscate the savings of hard-working Cypriot citizens is a shot across the bow for every working person in the world, a wake-up call to the perils of a system in which tiny cadres of elites call the shots and the rest of us pay the price. When we finally pull back the veils of power to expose the men pulling the levers in an age-old game they devised, we will see that prosperity is indeed possible for all.

For more on the public bank solution and for details of the June 2013 Public Banking Institute conference in San Rafael, California, see here.

Ellen is an attorney and the author of eleven books, including Web of Debt: The Shocking Truth About Our Money System and How We Can Break Free. Her websites are webofdebt.com and ellenbrown.com.  She is also chairman of the Public Banking Institute.

7 thoughts on “A Safe and a Shotgun or Public Sector Banks? The Battle of Cyprus”