Are Promissory Notes actually Securities before the homeowner signed the mortgage documents?  That’s a heavy thought isn’t it?  Listen to short clip here.

As DeadlyClear interviewed Blue Chip Films Producer/Director Nick Verbitsky about his new documentary film Confidence Game based on the demise and collapse of Bear Stearns, there emerged a confirmation to a missing piece of the mortgage-backed securitization process long suspected by foreclosure defense researchers and analysts that may expose a whole new avenue of fraud and even invalidate/void mortgage loan documents.

You can listen to the interview in its entirety here.

Nick remarks that “a shadowy group of hedge fund investors” was alleged to have taken down the firm, but the more he investigated the collapse, it became apparent that there was a lot more to the story. This film is the inside view of what was really going within the mammoth Wall Street firm with an in-depth perspective. 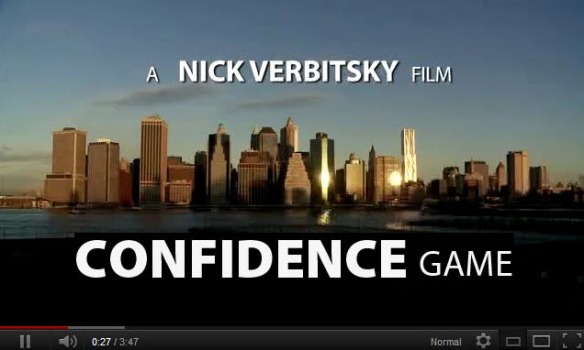 The rumor of conspiracy that evolved with the help of CNBC and the pugnacious nature and greed of the firm’s rough and tumble reputation that Bear Stearns could do whatever they wanted while they took on crushing debt in questionable securities may have led to a karmic boomerang as an 85 year old firm dropped to its knees and died in what felt like an overnight murder. When Bear Stearns went down there were $400 Billion in financed  “assets” (many toxic MBS) and only $12 billion in tangible equity – truly unbalanced and likely what other Wall Street firms are experiencing today covered up by tons of cash poured into them at the will of the administration by the Federal Reserve.

DeadlyClear asked Nick if he felt the mortgage-backed securities are what took down the Wall Street giant. Nick takes it back to what led up to their loss of image and caused 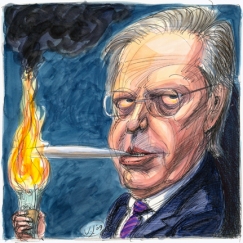 investors to look closer at their balance sheets. The fact that Jimmy Cayne, who CNBC named as one of the “Worst American CEOs of All Time,” ended up in a Wall Street Journal article deemed to be out smoking pot and playing bridge as the investment deals were crashing, didn’t help to build investor confidence in the firm as it struggled to regain momentum.

“There were bells and whistles going off,” said Nick, “in advance of the firm’s eventual collapse.” Listen to excerpt clip here. The money was flowing in to fund the trusts/bonds and mortgages were being written as fast as they could to fill the orders. This is starting to confirm what has truly been suspected for several months, that the investors’ funds had already funded the monies to purchase certificates and their funds, the “Use of Proceeds,” were flowing directly to the borrower. But… in order to invest pension and retirement funds there must have been a vehicle already created.  No doubt it sounds like the Trust documents went to the printer long before the borrowers, for the most part, signed the loan documents. Inside those trust documents (in most cases) was a list of identified loans or a Mortgage Loan Schedule that the investor was supposed to have reviewed… due diligence.

Think of it this way. The application for a loan turns into unsigned or hypothetical loan documents that are identified inside the Trust to attract investors’ approval to fund the Trust – i.e., pay for the loans. The Trust is or was already created. The promissory is identified on paper printed in the trust documents. Once the note is in the Trust, it becomes a security. The investors funds are applied and the loan documents (mortgage and promissory  security) are then provided for the borrower to sign and whisked away (God, only knows where).  The mortgage got recorded and the note – well… the note does not appear again, if then – until default and foreclosure. 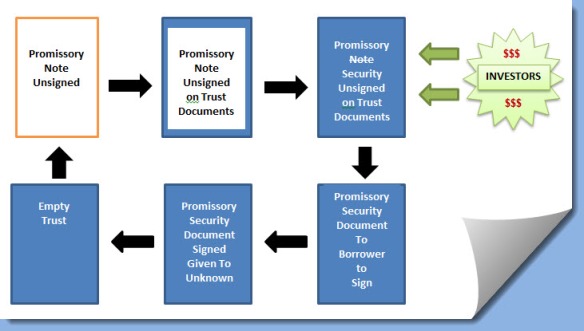 It’s the chicken or the egg syndrome – and it sounds like a duck, only the borrower has no disclosure that his promissory note was already sold and inside a trust as a security. We’ve always questioned how a loan could be signed, calculated into formulas for the trust, printed and circulated around to investors in a 2-week period of time… kinda unrealistic. And if the unsigned notes were sold or funded by investors – that appears to be Nemo dat… and probably a lot of other violations for investors buying sight unseen, questionable due diligence, pension fund investment guidelines and securities rules and regulations… not to mention state laws.

Think about this as you watch the Confidence Game when it airs in a theater or Film Festival near you. Stay tuned to DeadlyClear for a sequel interview with Nick Verbitsky.

Nick worked in conjunction with his brother Paul Vebitsky on the film. Paul is a founding partner of Blue Chip Films in Norwalk, CT. He manages all phases of production and works in many capacities from producing / directing to editing and project development.