“The mirage of promised mortgage modification lured the plaintiff debtors into a kafkaesque nightmare of stay-violating foreclosure and unlawful detainer, tardy foreclosure rescission kept secret for months, home looted while the debtors were dispossessed, emotional distress, lost income, apparent heart attack, suicide attempt, and post-traumatic stress disorder, for all of which Bank of America disclaims responsibility.”  All too familiar. 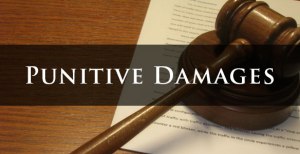 repetition? $45 million was one bankruptcy court’s opinion, in the case of a wrongful home foreclosure and eviction in knowing violation of the automatic stay.

The court described the plaintiff-debtors’ treatment by defendant Bank of America as Kafkaesque, and found their deeply emotional testimony (one of them attempted suicide during the ordeal) completely credible, awarding more than $1 million in actual damages for the loss of housing and emotional distress. The court also noted that Bank of America had repeatedly settled cases with federal and state regulators for hundreds of millions, and even billions, of dollars, in recognition of serious and repeated compliance failures, including some related directly

The fascinating 107-page opinion grapples at length with the dilemma of awarding enough punitive damages to effectively deter the defendant while avoiding an unseemly windfall to the plaintiffs. The solution: the decision awards $40 of the $45 million punitive award to consumer advocacy organizations and the five public California law schools. Citing an Ohio case, state statutes and several law review articles, the court proposes this split award technique as an appropriate step forward in the federal common law of §362(k) punitive damages. An interesting appeal is sure to follow. [READ MORE and FOLLOW CREDIT SLIPS]

Thank you Alan – and please keep us posted. Hopefully, the attorneys for the Debtor are willing to go all the way to the Supreme Court, if necessary.