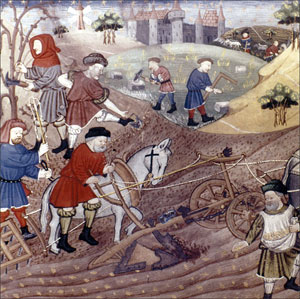 Have you ever wondered what the phrase “Borrower is lawfully seised of the estate hereby conveyed and has the right to mortgage” under BORROWER COVENANTS meant?

Glenn Augenstein, a seasoned researcher, history major and expert witness in foreclosure fraud, has taken the time to research the ancient word “seisin” which gives us better insight into what the mortgage document was meant to convey.

This two-part post is worth the read and education – and may give you a new perspective on the intention of the documents and the necessity to defend the title at all costs.

We’ve seen numerous times, in numerous cases, a Homeowner/borrower/defendant and plaintiff (Homeowner) precluded from raising any issues relating to a defective assignment

of mortgage (AOM).  This language, or similar, is frequently uttered by the court in a final order denying the Homeowner has standing to challenge an assignment of mortgage, and also usually granting summary judgment to plaintiff bank, “Defendant is not a party to the contract, or a 3rd party beneficiary, and therefore  has no standing to challenge the validity of the assignment.”

One case frequently cited by banks to support such rulings in the past three (3) years is Livonia Property Holdings, L.L.C., v. Farmington Road Holdings, L.L.C., 717 F.Supp.2d 724 (E.D.Mich. 2010), stating “Borrower disputes the validity of the assignment documents on several grounds outlined above. But, as a non-party to those documents, it lacks standing to attack them.” This information is readily available to the public on the Internet.

It is significant that the same court held differently two (2) years later in another case.  “It is true that the Livonia Properties opinion contains the statement that “there is ample authority to support the proposition that ‘a litigant who is not a party to an assignment lacks standing to challenge that assignment, ‘” Livonia Properties, 399 F. App’x at 102 (quoting Livonia Properties Holdings, LLC v. 12840-12976 Farmington Road Holdings, LLC, 717 F.Supp.2d 724, 736-37 (E.D. Mich. 2010)); but when read carefully the case does not stand for such a general and unqualified position. The Court believes, therefore, that Livonia Properties does not compel the conclusion that a foreclosure plaintiff can never attack the foreclosure by challenging the validity of an underlying assignment.” Talton v. BAC Home Loans Servicing LP, 839 F.Supp.2d 896 (E.D.Mich. 2012).

Banks aren’t nearly as quick (heh, heh) to wrap their arms around this counter holding.

Before making a mere layman’s attempt at providing answer(s) to potential questions raised above I’d first like to cover a bit of history in regard to conveyance of interests in, and ownership of, real estate generally.  It is long standing, and well established, that someone ALWAYS owns land, and that such ownership be a matter of public knowledge, of the public record.

Conveyance Before Writing – Livery of Seisin

Before the Norman Conquest of 1066 writing in England was uncommon, and for several centuries after.  Ownership of land, and changes in ownership, were memorialized in the public’s knowledge via “livery of seisin.”

“Livery of seisin. Hist. The ceremony by which a grantor conveyed land to a grantee. • Livery of seisin involved either (1) going on the land and having the grantor symbolically deliver possession of the land to the grantee by handing over a twig, a clod of dirt, or a piece of turf (called livery in deed) or (2) going within sight of the land and having the grantor tell the grantee that possession was being given, followed by the grantee’s entering the land (called livery in law). See SEISIN. [Cases: Deeds 21.C.J.S. Deeds §§ 12–13.]”

“[W]e may now pause to wonder how transfer of these potentially infinite interests was accomplished. Without a modern system of land records, it would be desirable that the transfer be effected with sufficient ceremony not only to mark itself indelibly in the memories of the participants, but also to give notice to interested persons such as the mesne lord above the transferor. The central idea was to make ritual livery (meaning ‘delivery,’ from the Old French livrer) of seisin (meaning, roughly, ‘possession,’ from the Old French saisir or seisir).

The transferor and transferee would go to the land to be transferred, and the transferor would then hand to the transferee a lump of soil or a twig from a tree — all the while intoning the appropriate words of grant, together with the magical words ‘and his heirs’ if the interest transferred was to be a potentially infinite one.” Thomas F. Bergin & Paul G. Haskell, Preface to Estates in Land and Future Interests 10–11 (2d ed. 1984).

The ceremony was usually attended by witnesses.  I imagine the bigger the parcel of land the more witnesses were in attendance.  In the absence of a writing it was the ceremony and witnesses that created the public knowledge, and thereby the public record.

Though writing was rare a written “charter of feoffment” would occasionally be drafted.  This might occur when the boundaries of a given parcel were particularly complex.  Even when employed the charter would not by itself be the conveyance.  The conveyance was the livery of seisin – and without same the charter was of no effect.

Language utilized in charters helps to illustrate this point.  It wasn’t “By this charter I hereby give…”  Rather it was “Know ye that I have given…”  Livery of seisin was the present tense ceremony of conveyance.  A charter of feoffment was a past tense writing about an event that had already occurred.  In the presence of a writing it was still the witnesses that created the public record.

Livery of seisin was not abolished in England until 1925 with the passage of The Law of Property Act.

The Statute of Frauds 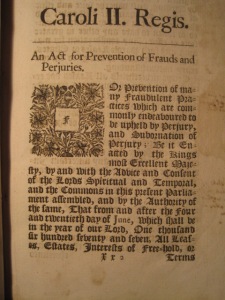 In the latter part of the seventeenth (17th) century a new method of conveyance and recordation was, out of necessity, developed;   In the aftermath of the English Civil War in 1642-1651, a midst some confusion, there were efforts to game the existing system of livery of seisin, and to acquire some ill booten gotty, er.., um… ill gotten booty.

The method employed was to hire a couple of contract perjurers to act as false witnesses, usually locals in good standing in the community, to come into court and offer perjured statements in regard to a land transaction .

“Yes, I saw Jones sell Blackacre to Johnson for £10 sterling, on a handshake.”  You can imagine Jones was rather upset by this.  The party employing the more upstanding community member would usually win these disputes.  Enter the profession of the  “contract perjurer.” [Some things never change. DC Ed]

After several years it became quite clear what was occurring – crooked folks were hiring the best, most well thought of contract perjures they could find, and stealing properties across the countryside – and how the courts had become complicit, unwittingly or otherwise, in the fraudulent takings.

Enter the English Statute of Frauds of 1677.  The important parts are relatively short.  The emphasis is mine.

For prevention of many fraudulent Practices which are commonly endeavored to be upheld by Perjury and Subornation of Perjury:

“Be it enacted by the Kings most excellent Majestie by and with the advice and consent of the Lords Spirituall and Temporall and the Commons in this present Parlyament assembled and by the authoritie of the same That from and after the fower and twentyeth day of June which shall be in the yeare of our Lord one thousand six hundred seaventy and seaven All Leases Estates Interests of Freehold or Termes of yeares or any uncertaine Interest of in to or out of any Messuages Mannours Lands Tenements or Hereditaments made or created by Livery and Seisin onely or by Parole and not putt in Writeing and signed by the parties soe making or creating the same or their Agents thereunto lawfully authorized by Writeing, shall have the force and effect of Leases or Estates at Will onely and shall not either in Law or Equity be deemed or taken to have any other or greater force or effect, Any consideration for makeing any such Parole Leases or Estates or any former Law or Usage to the contrary notwithstanding.”

The original § V is the portion relating to conveyances and sales of real estate.

“V. And be it further enacted by the authority aforesaid, That from and after the 4 and twentieth day of June, all devises and bequests of any lands, or tenements, devisable either by force of the statute of wills, or by this statute, or by force of the custom of Kent, or the custom of any borough, or any other particular custom, shall be in writing, and signed by the party so devising the same, or by some other person in his presence, and by his express directions, by three or four credible witnesses, or else they shall be utterly void and of none effect.” [Research source]

Between the “writing” and the “three or four credible witnesses” this resolved the problems of the contract perjurer.  Now it becomes the writing that effectuates the conveyance.

For centuries this system worked quite well.  Until the last decade or so.  But now those with bad intentions have discovered ways around the requirements of the Statute of Frauds.  Perjured testimony in court as the only proof doesn’t cut it any more.  What is required is an executed writing that also lies. We’re now dealing with rampant contract perjury, and contract forgery.  It is utterly insane.

The astute recorders, of which there aren’t many (John O’Brien, Kelley Monahan, Curtis Hertel, Jeff Thigpen, Phil Ting [forgive me if I’ve left any out]), liken their recorders offices, and records, to being a crime scene, and that seems to be accurate.

Follow this post for Part 2 – How to Challenge an Assignment of Mortgage. Have you signed up to follow DeadlyClear? See the top right-hand sidebar and enter your email address to receive new posts. It’s FREE – and you won’t want to miss the next one.

* Disclaimer: This is research and personal experience expressed and shared for the purpose of thought and conversation. Nothing in this post should be construed as legal advice or practicing law. If you need legal advice you should consult an attorney.

Part 1 – How to Challenge an Assignment of Mortgage is as popular as Part 2. The author has been a terrific researcher and paralegal assistant from whom we have all benefited.

Glenn recently sustained a serious back injury and has still helped us through his own pain of foreclosure. Please donate to Glenn and help him maintain his bills and his home while he recovers.

GoFundMe is safe and easy to use. Click HERE to donate and help Glenn.